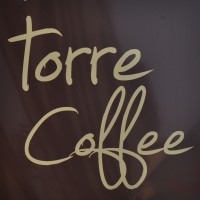 I’m rather annoyed that I didn’t discover Torre Coffee on my previous visit to Cardiff almost exactly a year ago. However, back then Torre had only been open a few weeks, so I could perhaps be excused. I almost missed it on this trip too, but am indebted to a tip-off on twitter a few days before my visit, which reminded me to add it to my list.

To have missed Torre a second time would have been a terrible shame. An Italian-Romanian collaboration in the heart of the Welsh capital, serving James Gourmet Coffee from Ross-on-Wye on the English side of the Welsh border, Torre is a lovely place, which gives you a warm, friendly welcome. Torre’s owned by Silvia (Romania) and her husband, Ruggero (Italy), who came to Cardiff specifically to set up Torre, having been inspired by the coffee shops of Edinburgh. Cunningly, I’d timed my visit to coincide with their day off, but I did meet Silvia’s sister, Roxana, who was holding the fort (castle?) with her boyfriend.

As well as the usual espresso-based coffee menu, there’s bulk-brew filter, loose-leaf tea, full breakfast and lunch menus, plus pastries and cakes, the latter baked on the premises.

March 2016: Sadly Torre has closed and will be sadly missed.

Torre Coffee, on Cardiff’s Castle Street, is opposite the Castle itself (Torre means “Castle” in Italian, by the way). Immediately to the left of the Castle Street entrance to the Castle Arcade (home of Coffee Barker), it’s not that much to look at from the outside, a couple of arched windows and a pair of seats tucked behind the A-board on the pavement.

Stepping inside, Torre stretches out before you. Although it’s fairly wide, Torre is also very deep, giving lots of room for seating towards the back. Although it’s a single room, giving Torre a great sense of space, it’s effectively split into three distinct spaces, starting as you come in. Immediately to your left is a neat window bar with four stools and beyond that, a large, welcoming counter. Along the right-hand wall, opposite the counter, is a row of round tables with comfortable chairs.

The second space starts beyond the counter, where, on the left, there’s another bar, this one in a lovely little nook done out as a library. Although this is only wallpaper rather than actual books, it’s really effective. There’s also another round table in the nook, while on the opposite side of the room is another round table and a smaller, high table with a couple of stools.

All credit to Torre, this is not a promising space and could easily feel cramped and gloomy, particularly given the low ceiling. However, by resisting cramming too much in, Torre has given it a very spacious feel. Even so, across all three spaces, you could comfortably fit 40 people in. The décor also helps: white walls at the front and pale, painted brick at the back, combine with a wooden floor and white ceiling to make the most of the natural light that floods in at the front. It really is a cleverly-constructed space. I particularly liked the counter, a wonderful wooden construction with some glorious lights.

So, to business. I had an espresso, a Bolivian Copacabana, which might be the first James Gourmet Coffee espresso I’ve had. If so, I’ve been missing out. It was lovely, dark and strong without being bitter, and very smooth: a fine cup of coffee. I followed that up (at Roxana’s insistence) with a cappuccino which was just as good. Kate, my tea-drinking friend, had the Earl Grey, which she pronounced to be very good. All the tea is loose-leaf and is served in individual tea pots; Kate was particularly taken with the individual bottle of milk which accompanied it, while we both admired the lovely plates (note my failure to take any decent pictures of them!).