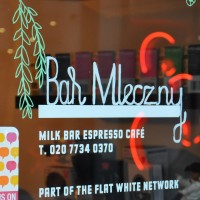 December 2021: I’ve learnt that Milk Bar has sadly closed. It will be missed.