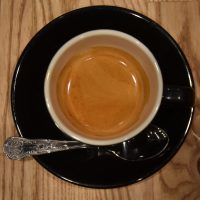 I’ve been meaning to visit Tintico ever since it opened in Finchley in November 2014. Sadly, my trips to London’s northern suburbs are rare, so when Tintico opened a second shop in Soho in May 2019, my chances improved dramatically. However, it wasn’t until last week, when walking to Euston from Waterloo on my way to my Dad’s, that I finally made it.

On Greek Street, in the Soho’s northeastern corner, Tintico’s in an area which used to be a hotbed of London’s speciality coffee scene when I started the Coffee Spot almost 10 years ago. Sadly, many of those pioneers are gone, with Milk Bar the latest casualty. In that respect, Tintico is a fine addition to the neighbourhood, reminding me of those early coffee shops in style and spirit.

A small spot, with a single table outside and a handful more in the compact interior, Tintico offers a seasonal single-origin house espresso from Campbell & Syme (currently the Sonsón Reserve, a washed coffee from Colombia), along with a guest espresso, which doubles as the pour-over option via the Hario Switch. There’s also a tapas-style food menu, plenty of cake, plus beer, wine and a selection of brunch cocktails.

Tintico is on the western side of Greek Street, just south of Soho Square. Occupying an old clothing shop, it’s a compact spot, with a floor-to-ceiling glass front, consisting of two windows on the left and a matching door on the right. A solitary table is tucked in front of the windows on the pavement outside, mirrored by a second table inside in the windows to the left of the door.

A pair of three -person tables lines the wall on the right, with the wooden counter, set back from the window, opposite on the left. This is a simple, open affair, running lengthways along the wall, cakes to the fore, followed by the till and the menus. The far end is the realm of the coffee, starting with the pour-over area, then come twin Mythos One espresso grinders and the White Eagle espresso machine.

There’s more seating at the back, beyond the counter, starting with three two-person tables lining a bench on the right, in front of a massive mirror which occupies almost the entire wall. There’s one more table, another three-person one this time, which is on the left, tucked away behind the counter.

The mirror, by the way, is part of the shop’s legacy as a clothing retailer, while there’s more evidence if you go to the toilet, accessed through a three-sided nook at the back which, disconcertingly, has mirrors on all three walls. This used to be the fitting room, while the back wall is actually the door to the toilet, something which took me a while to work out.

The rest of the décor is pleasingly simple, with wooden floors, stone walls, and lots of exposed bulbs (which can be dimmed) to compensate for the lack of natural light at the back. There are also multiple plants, both on shelves and hanging from the ceiling, which add a welcome splash of green.

Tintico offers an interesting tapas-inspired brunch menu, with ten or so options. I had the Spanish tortilla for lunch, which was served hot in a small dish. It was perfect for me, but if you want something more substantial, you should order a couple of dishes to be on the safe side (and the prices reflect that).

When it comes to coffee, Tintico offers its house espresso (roasted by one-time near neighbours in Finchley, Campbell & Syme) as the default for milk-based drinks, with the guest for espresso, Americano and filter. I began with a gorgeous cortado, the current house espresso, the Sonsón Reserve, coming strongly through the milk, offering a pleasing touch of acidity which goes really well with the natural sweetness of the milk.

The guest coffee changes every six weeks or so, with Bruno, the head of coffee, looking to bring in roasters from around Europe. For now, the current guest coffee is the Los Ancestros, a washed coffee with an extended fermentation stage from Guatemala, roasted by 39 Steps Coffee, another relative newcomer to the central London coffee scene. This is available through the Hario Switch (think of a Clever Dripper, but shaped like a V60) or as an espresso, which is how I tried it.

It was very different from a typical espresso, but this is where my palate lets me down, with my inability to describe it. Fortunately, another customer, who ordered an espresso at the same time, said it was sweet and well-balanced. Definitely one to try if you like different coffees.