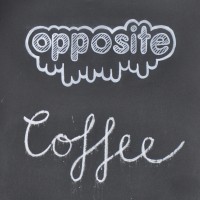 Out in Chapel Allerton, in the leafy suburbs north of Leeds city centre, is the third of the eclectic local chain known as Opposite. The original Opposite (opposite Leeds University, hence the name) is nearly 10 years old, while the second (now closed), under the soaring stained-glass arcades of the Victoria Quarter shopping centre, opened five years ago. They were joined last year by the Chapel Allerton branch, which opened under the name “Cup & Saucer”. However, about a week after my visit, it was due to be re-branded as “Opposite Chapel Allerton”.

Several people in the Leeds coffee scene told me that it was their favourite spot, and I can see why. Just off the busy Harrogate Road, in a parade of local shops and restaurants (which includes a large Caffe Nero), it’s a lovely little spot, exuding charm all the way from the big windows at the front to the massive chalk drawing on the back wall.

Sandwiched between window and wall is some excellent food, a great range of cake and some wonderful coffee from London’s Square Mile, plus regular guests. There’s a fairly standard espresso menu plus single-origin pour-over through V60 or Aeropress. It’s well worth a detour!

I was recommended Opposite Chapel Allerton by such luminaries as Leeds’ own North Star and Harrogate’s Press Coffeehouse. Sandwiched between a pharmacy and a Chinese takeaway on Stainbeck Lane, it doesn’t immediately jump out at you, although by the time you read this, there might be some new signage up outside. However, any lack of immediate impact is more than made up for when you step inside.

It has a fairly simple layout, counter on the left, seating on the right, with more seating at the back under a striking chalkboard drawing by local artist, David Firth. However, I suspect that some aspects of the drawing will have changed, since while I was there it read “welcome to the Cup & Saucer”.

Seating is provided by a padded wooden bench along the right-hand wall opposite the counter and by another padded bench at the back. Both benches have a row of two-person tables (four on the right, three at the back), each with its own chair, while between the benches, in the right-hand corner, is a small two-person bar with a couple of bar stools. In all there’s seating for 16 people, not many given its size, resulting in a very uncluttered feel.

With its low ceiling, it could be a fairly dark space, but it’s rescued from this fate by the glass frontage, running the width of the store and punctuated by a (glass) door about three-quarters of the way along. In case it’s gloomy outside, the counter is lit by a series of light-bulbs hanging from the ceiling, using recycled Moka pots as lamp-shades, while each of the seats on the right-hand side has its own angle-poise lamp anchored to the wall above it.

The counter itself is a two-part affair. First up is the food, encased in white tiles and glass display cases. There’s a decent selection of cakes, with four different types of flapjacks, plus fruit loaves, blondies, cookies and the like. Next comes breakfast/lunch, depending on the time of day (typically I managed to arrive right between the two!). Finally there’s the till, after which the counter turns into a wooden affair, housing the coffee.

Starting with a pair of grinders (Square Mile’s Red Brick seasonal espresso blend and the decaf blend, also from Square Mile), the Synesso espresso machine comes next, with the V60s and Aeropresses right at the end. I was in the middle of a large café-crawl on behalf of Caffeine Magazine, and, largely out of a sense of self-preservation, I opted for the decaf, which barista Callum recommended as a straight espresso.

In the past I have struggled with Square Mile’s decaf espresso, finding it a little anonymous in milk, so I was curious to see how it stood up on its own. The blend that Opposite was serving was a mixture of 80% Brazilian Jatoba and 20% Guatemala Cerritos. It turned out to be excellent, a very nice and dark espresso, but not at all bitter and with a great mouth feel.

The Chapel Allerton location itself was lovely and I could have stayed there a lot longer than I did. Sadly, I had to go, which was probably just as well since it was just starting to get busy for the lunchtime rush by the time I left.

You should also check out this excellent video profile of Opposite Chapel Allerton by Beth Krysta Wilson.

If you enjoyed this Coffee Spot, then take a look at the rest of Leeds’ speciality coffee scene with the Coffee Spot Guide to Leeds.

7 thoughts on “Opposite Chapel Allerton”