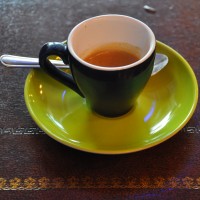 What’s going on? For the third Coffee Spot in a row, I’m visiting places in the order in which they opened! Hot on the heels of the original Artisan in Putney and the first Society Café on Bath’s Kingsmead Square, comes Doctor Espresso – Mama V’s in Clapham High Street!

Mama V’s serves the same basic menu as the Caffetteria: coffee, cake and some lovely Italian food (panini, calzone, pizza, pasta & salad). If ever a place was designed to appeal to me, it’s Doctor Espresso’s. Pride of place, of course, goes to a classic 1957 Gaggia Tipo America lever espresso machine, just one year younger than the one in the Caffetteria!

In size, Mama V’s is similar to the original Doctor Espresso Caffetteria, although the layouts are very different. The Caffetteria’s long and thin; Mama V’s wide and, while deep, the back’s given over to the kitchen, leaving a seating area not much bigger than the Caffetteria’s.

Mama V’s occupies the final railway arch in a row running along Voltaire Road, which connects Clapham High Street with the station of the same name. It immediately reminded me of Bristol’s Hart’s Bakery and Kentish Town’s The Fields Beneath, although neither of those is technically under a railway line. In size, Mama V’s is similar to Fields, while in layout and feel, it’s more reminiscent of the much bigger Hart’s.

Coming out of the station, turn left and, following the railway, you’ll come to Mama V’s, tucked away in a sheltered corner, affording plenty of space for outdoor seating. For now there’s just a couple of tables, one either side of the door, but come the warmer weather, expect to see this expanded.

The front of Mama V’s is completely glass, so it’s both very bright inside and you can see everything from out on the street. Sensibly, the gorgeous Gaggia has its own counter on the left-hand side, facing the window for all to see.

Entering through the glass doors in the centre of the arch, you’re immediately confronted by the main counter. Built by the fair hands of Russell, aka Doctor Espresso, this wonderful construction of glass blocks flanked by copper piping is modelled on a similar (but smaller) counter at the Caffetteria. It holds the savoury goodies and separates the customers from the kitchen at the back of the arch.

To your left is the second counter, holding the Gaggia Tipo America lever espresso machine, beautifully restored by Doctor Espresso. This L-shaped counter has the Gaggia facing the window and the bottom of the L facing the customers, providing a convenient point to order your coffee and food.

What seating there is occupies the remainder of the space: between the Gaggia and the window is space for a narrow window-bar, while on the other side, a four-person, L-shaped bar occupies the right-hand window and some of the wall. Beyond that, tucked between wall and main counter, is Russell’s other pride and joy, a sofa which came from Bill Gates’ office. There’s also a lovely coffee table in the shape of two giant books resting on top of each other.

The Gaggia, the second-oldest espresso machine in use in London, dates from 1957, but it’s not the oldest working espresso machine at Mama V’s. On the main counter is a 1932 Tossetti & Pirovano cylinder machine, also restored by Russell, but for various reasons, it’s not in use. Even older is the 1923 till, which despite being in full working order, isn’t in use either. Instead, Mama V’s uses (much to my amusement) an iPad till.

Doctor Espresso uses a classic Italian espresso blend, with beans roasted in Italy, which is very much to my taste. I had an espresso, which was as wonderful as ever, strong and smooth without being bitter. I backed this up with a Calzone Parmigiano, a lovely, crisp, folded pizza packed full of vegetables and oozing with cheese, all consumed on Bill’s old sofa!