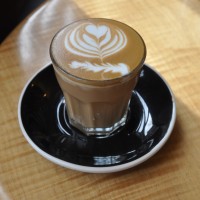 Greenstreet Coffee Co is something of a fixture in the fledgling Philadelphia speciality coffee scene. It’s been around for five years as a roaster, supplying local cafés such as Cafe Twelve. Two years ago, it opened its first (and so far only) coffee shop on the corner of Spruce and S 11th Streets, just south of the centre where it joins a growing band of speciality coffee places.

Greenstreet itself is pretty small, with just enough room for a couple of small rows of tables along the windows and some more seating outside. Although the interior is lovely and the outdoor seating’s some of the most comfortable-looking that I’ve seen in a while, the real draw is the coffee, with a wide range of Greensmith’s considerable output available at any one time.

During my visit, there were two single-origins on espresso plus the house-blend, Lupara, and a decaf, Starlight, all on a pair of twin grinders. The two single-origins were also available as filter, where they were joined by another four single-origins, to be enjoyed through either Aeropress or Chemex. There’s also a Syphon option on the menu, plus cold brew and nitro cold brew. Even the tea selection’s decent!

March 2018: Popped bak to say hi to Greenstreet, which is still as awesome as ever and still offering the same excellent range of coffees. This time I tried a Chemex of an Ethiopian Kilenso, a wonderfully fruity, naturally processed coffee.

Greenstreet, with its deep-red paintwork, cuts a striking figure on the corner of Spruce and S 11th Streets, enhanced by the tall, thin windows which can be fully opened in the warm weather, effectively turning Greenstreet into a (semi) open-air café. If you’re tempted by this, you can always go the whole hog and sit outside. There’s a pair of two-person wire-mesh tables on either side, with some very comfortable-looking chairs. Sadly the streets aren’t as quiet as the likes of Rival Bros.

Greenstreet’s essentially square, the corner cut off by the door. Inside, this is replicated by the counter, which occupies the corner opposite the door and also has the corner facing the door cut off. This is excellent, since you walk in to find the barista directly in front of you!

Windows, lined with seating, run the full length of the walls to left and right, flooding Greenstreet with light.  Although the walls look similar in length, to the right there are four small, three-sided tables, while to the left, only three. The tables on the 11th Street (right-hand) side run along a wooden bench, each table having its own stool, while those on the Spruce Street (left-hand) side, run directly along the window, with just four stools for seating. Pleasingly for somewhere so small, ample power outlets line both walls and there’s free Wifi.

In contrast to the red exterior, the interior is green, with a warm yellow ceiling. However, the skirting is red, while the windows have 15 small panes, each with its own red frame. It’s a surprisingly harmonious colour scheme, particularly in sunlight. The final touch comes with the counter, a metal affair with a marble top, fronted with red metalwork cut to represent the flames of a coffee roaster. Three long, three-sided metal light shades hang down from the high ceiling above the counter, representing the heat rising from the roaster.

The counter is organised around the two-group La Marzocco, which is front and centre, till and cake to the right, water tap and two twin espresso grinders to the left. Although there’s not much space behind the counter, Greenstreet still finds room for the obligatory bulk-brew (one of the six single-origins on offer, changing every few days), plus pour-over, with enough space left over for dishwashing!

My barista recommended the Kellensoo single-origin, from the Sidamo region of Ethiopia, as an espresso. This was lovely: very smooth, with a great, velvety texture. Although a little fruity for my palette, I couldn’t really fault it. I’d have loved to try it as a filter, but I was rather over-caffeinated, so followed it up with a decaf cortado with some amazing latte art. It was so pretty I didn’t want to drink it. I left it for a while, hoping the pattern would disperse so that I wouldn’t feel guilty, but the milk was so superbly steamed that it held its pattern right to the bottom of the glass. The coffee itself was very smooth, forming a harmonious whole with the milk.

Finally, I was tempted by the offer of nitro cold brew: brewed for 18 hours then served under pressure with nitrogen, it came out of the tap like beer. While I’m not cold brew fan, I liked this one, which was very smooth.