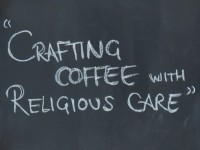 Saint Espresso is an offshoot of Leyas in Camden Town, although it doesn’t advertise the link, so it’s easy to visit the two and not realise the connection. This is particularly true since the two are like chalk and cheese in almost all respects, except that they both serve excellent quality coffee from a regularly-rotating cast of roasters.

Saint Espresso is at the eastern end of Pentonville Road, just around the corner from Angel Tube station. The busy Pentonville Road does not, at first sight, seem the ideal location for a coffee shop, but Saint Espresso has perhaps the best spot, on the northern side of the road, well set back from the traffic on a broad expanse of pavement. This means that even the outside tables are well away from both pedestrian and road traffic, making it a comparatively sheltered spot.

South-facing and with a tall frontage that’s entirely glass, Saint Espresso’s a sun-trap. Even on a gloomy day, it’s flooded with light. Much smaller than Leyas, there is commensurately less food; just a decent selection of cakes and sandwiches for lunch. Where it excels, of course, is in the superb coffee (one espresso and one filter option).

Saint Espresso is almost a cube: slightly wider than it is tall, it’s also a smidgen deeper than it is wide. You enter on the left, counter in the left-hand corner ahead of you. To your right, there’s a large, communal table occupying the entire window, which, on a sunny day, can be painfully bright. Alternatively, three two-person tables along the right-hand wall don’t catch the sun as much. There are two tables outside in front of the window to complete the seating.

The interior’s lovely. Although two out of three walls, plus the ceiling, are plain white, the bare brick of the left-hand wall draws the eye, particularly when it catches the afternoon sun. The simple, clean look is continued with the plain, tiled floor, while the black woodwork and piping provides a very effective contrast. It has a wonderfully uncluttered layout and there’s lots of space, even when busy, the high ceiling and glass front contributing to the sense of space.

In keeping with Leyas, Saint Espresso changes roaster every month or so. During September, James Gourmet Coffee was in the house, a rare find in London (the only place I know regularly serving James Gourmet is Villiers Coffee Co). The espresso was an Ethiopian Negosho and the same bean (albeit with a different roast) had just gone on filter. The change, in fact, was so recent that the menu-board hadn’t been updated.

The barista, Santa, suggested the filter, which I ordered along with a toasted mozzarella, gruyere, tomato and pesto focaccia for lunch. One of the impressive things about Saint Espresso is its dedication to coffee excellence: the espresso recipe’s on the wall behind the counter, compete with extraction graph, right next to the EK-43. This commitment isn’t compromised when it’s busy. When I was there, at 1.30, Santa was on her own, and she was doing everything herself: espresso, pour-over and food. There was a V60 for me and another customer, plus multiple espresso drinks. While there were frequent queues, no-one seemed bothered: good things come to those who wait.

The result was that my filter coffee was a long time coming. This isn’t a criticism: I’d rather it that way than hurried and badly done. In the end, the delay suited me since it gave me time to eat my tasty, stringy, melted mozzarella focaccia.

My coffee eventually arrived in a carafe with a glass cup. Regular readers know it’s rare for me to get anything, but on sniffing the coffee, I immediately got a rich chocolatey hit (shame the tasting notes said peachy, passionfruit acidity, but hey ho). This was also very apparent on my first couple of mouthfuls, a rich, dense flavour, far removed from subtle, delicate filters I’ve been drinking recently. The sweetness dissipated as it cooled and although it lost that initial wow factor it was still a very fine cup, even when cold.

I tried the espresso for comparison, a nicely rounded, well-balanced coffee. There were definite similarities, but I didn’t get the chocolate notes, the taste being more like the filter when it had cooled. I paired this with a Cinnamon Danish, which reminded me of Nordic cinnamon buns. It had a lovely dusting of cinnamon sugar over rich, closely-wound pastry. Neither sticky nor sickly, it was perfect.