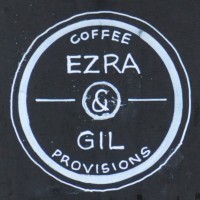 Ezra & Gil’s one of the many Manchester Coffee Spots that popped up in 2015. In Ezra & Gil’s case, it’s in good company, sitting on the corner of Hilton and Newton Streets, almost equidistant between TAKK and Foundation Coffee House (which I finally visited a mere 18 months later). The likes of Fig + Sparrow and North Tea Power are also nearby. You could do a coffee-crawl taking in all five, while walking less than ½ km!

I discovered Ezra & Gil, which opened in late July, primarily through social media, where I was tempted by picture after picture of some lovely-looking food. Unsurprisingly, Ezra & Gil is as much about the food as it is about the coffee, as well as selling a range of groceries on the side. In this respect, it reminded me of Bridport’s Soulshine Café. Ezra, by the way, is Hebrew for “helper”, while Gil means “happiness”.

The food, with an impressive all-day breakfast range and lots of other goodies, is cooked on-site in a large kitchen behind the counter, while the coffee is from local roasters Heart & Graft. The famous Barnraiser blend’s on espresso, with a single-origin on V60 for filter fans.

November 2017: Ezra & Gil now uses another Manchester roaster, ManCoCo, with its standard espresso blend, plus a single-origin on V60.

How to describe Ezra & Gil? Communal workspace? It certainly ticks that box, with plentiful tables, multiple power sockets and free Wifi (the password’s plastered everywhere). Canteen? The food lives up to that billing. Greengrocers/corner shop? Yep, that too. Coffee shop? With some stunning coffee from Manchester’s Heart & Graft, it’s got that nailed as well. Maybe it’s all four. Or maybe it’s whatever you want it to be.

Occupying a generous spot on the corner of Newton & Hilton Streets, Ezra & Gil’s essentially one large square, its entrances in diametrically-opposed corners, one on Newton Street, which deposits you by the counter, the other on Hilton Street, which leaves you as far away from it as possible!

The Hilton Street door has an airlock-type arrangement which turns 90⁰ to the left, leaving you looking down the length of Ezra & Gil. There’s a nook to your right with three padded benches surrounding a coffee table. The rest of the seating’s a well-spaced mix of tables, some high, some normal height, some round, some square, but all made of scaffolding poles and wood. A long, 20-person communal table runs about half the width of Ezra & Gil, giving you an idea of just how big it is, while there’s a smaller one further on.

The walls are punctuated at regular intervals by tall, narrow windows, each with a two-person window-bar, light, power socket and bar-stools. Four overlook Hilton Street, but Newton Street only has two, the extra space occupied by the door, then counter. Despite this abundance of windows, it’s quite dark inside, although that could have been the grey, Manchester day I was there. On the other hand, that’s typical Manchester, so it’s probably what Ezra & Gil was going for.

Despite multiple lights, it’s still fairly subdued inside, adding to the atmosphere created by the exposed brick, wooden floorboards, dark grey woodwork and low ceiling (also dark grey). Being a large, single space, it can be very loud, particularly while busy. Fortunately this was mostly background chatter, which I like, Ezra & Gil content to have the music underneath the background noise rather than turning it up in an attempt to dominate.

Although the address is Hilton Street, what I consider to be the front door is on Newton Street. This deposits you in a large area directly in front of the counter (which is to your left). This has sensibly been left clear of seating, allowing plenty of space for customers to ponder their choices, order and wait (for takeaway) without getting in anyone’s way. Beyond/behind the counter is a large, open kitchen, and, beyond that, an area dedicated to the sale of general provisions.

I couldn’t not try the food, so I had the veggie breakfast (for lunch) with poached eggs and extra toast, which was sublime. This came with a stuffed courgette, topped with grilled cheese, which is a welcome change from veggie sausages. Even the baked beans were done to perfection.

I paired this with a V60 of a really fruity Ethiopian Kochere, served in a glass carafe with a lid, and with a nice, bright red cup. It matured wonderfully as it cooled, losing a little of the fruitiness, but gaining in depth and complexity. It’s coffee like this that converted me to single-origin pour-over in the first place.