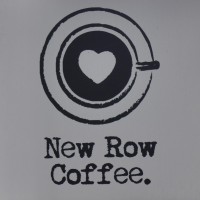 New Row Coffee has been around for several years, pleasingly occupying a spot on New Row, just off St Martin’s Lane, midway between Leicester Square and Covent Garden. I’ve walked past on several occasions, but never had reason to stop, always being put off by its size (or lack thereof). However, on a recent visit to Freed’s on St Martin’s Lane to buy some new dance shoes, I decided to change all that. I was so impressed that I returned the following week with my camera, and exactly one week later, here it is on the Coffee Spot!

New Row’s one of those small coffee shops that thinks it’s actually much bigger. For somewhere with just two tables and a pair of seats at the counter, it serves a range of coffee that would put many larger rivals to shame. Joining the obligatory espresso menu, built around Caravan’s ubiquitous Market Blend, there’s a regularly-rotating filter coffee (also Caravan) through V60, AeroPress or Syphon. Add to that a decent range of cakes and, a recent addition, a small sandwich and savoury tart selection, and you have a place for all occasions. If you can find a seat!

July 2017: Following the change of ownership (see after the gallery), New Row Coffee has been rebranded The Espresso Room. The Market Blend is still on espresso, but it’s been joined by various guests, both on espresso and pour-over. Otherwise, little appears to have changed.

New Row Coffee changed hands about a year ago, when it was bought, along with its sister shop, the much larger FreeState Coffee (now closed). The new owner also bought The Espresso Room, a venerable London institution which predates even New Row (and is even smaller still), making a chain of three rather disparate coffee shops, each with its own character.

New Row’s layout is pleasingly simple. Slightly wider than it is deep, the front consists of floor-to-ceiling windows, with the door on the right. The counter, a two part affair, occupies the back half of the store, cake (and now food) on the right, coffee on the left, where two stools allow you to sit and watch your coffee being made. The main seating is in the window, a bench running the width of New Row. There’s enough space for a pair of four-person square tables, each with a couple of low stools, so, if you all squeeze up, it seats 10.

New Row has a very tempting cake selection and has recently started serving sandwiches (one meat, one vegetarian) and savoury tarts at lunchtime. This, however, is in its early stages and may well change. Loose-leaf tea and soft drinks are also available, although the main draw is the coffee.

For such small space, New Row’s an object-lesson in what you can do when you’re well-organised. A work surface against the back wall holds (from right-to-left) the sink, espresso machine (two-group La Marzocco) and its grinder, filter grinder, sandwich toaster and hot-water boiler. The tea’s tucked away on a shelf on the left-hand wall. Well, I suppose it has to go somewhere.

On my first visit, I only had time for a cheeky piccolo, which arrived in a glass, Caravan’s Market Blend, as ever, going well with milk. I had more time on my return, so had a pour-over, which is made on the left-hand part of the counter (it also holds the takeaway lids and an impressive cold brew apparatus). If you sit at the counter, you get a lesson in the method of your choice: V60, AeroPress and Syphon.

There’s only one choice of bean, usually a single-origin (but can be a blend), which changes every week or so. That morning, the new beans (Burundian Buziraguhindwa) had arrived, and my barista recommended it through the V60, which was an excellent decision. It’s quite a subtle coffee, but very well-balanced and has good body.

Since it was lunchtime, I tried one of the new sandwiches, a toasted beetroot and brie bun. This was really tasty, the strongly-flavoured brie going well with the beetroot. I was a little worried that these dominant flavours would overwhelm my coffee, but it more than held its own.

You can read what happened when I tried the same bean through the AeroPress at Yorks Bakery Café in Birmingham.

8 thoughts on “The Espresso Room (was New Row Coffee)”