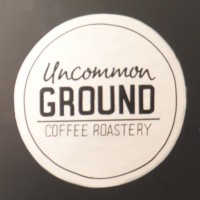 Uncommon Ground occupies a lovely spot on the right-hand side of the Royal Arcade, not far from the entrance on St Mary Street. Its wide front is entirely glass, the windows on either side curving elegantly inwards towards the central, recessed door, almost as if they’re drawing you inside. Outside, there are three small, round tables on either side of the door. These make a good option, particularly on a bright day, when the glass roof floods the arcade with sunlight.

Uncommon Ground is roughly square, being slightly deeper than it is wide. Directly opposite the door, about one-third of the way in, is a brick pillar, all that’s left of what was the back wall of the original units. It’s been knocked out to extend the space to the rear. Behind it, part of a brick wall remains. This used to run all the way to the back, separating the rear part into two separate spaces. Now it forms a rather curious island in the centre of Uncommon Ground which splits what could be one rather uninteresting space into several much more interesting spaces.

Coming back to the front, there’s a window-bar either side of the door. To the right, a lovely staircase immediately behind the bar sweeps intriguingly upwards to a bright, airy room which is not yet in use. At the foot of the stairs, there’s another cosy, two-person table. To the left, the area behind the window-bar has several well-spaced square tables.

Despite the windows, Uncommon Ground’s quite dark, particularly at the back. There are multiple lights, each with an amazing copper-kettle lampshade, but they add to the atmosphere rather than provide (bright) illumination. The result is quite wonderful, a subdued, cosy space which feels like a basement even though it’s not. This is helped by the exposed-brick walls and black floor/ceiling. The final touch is a fake (but very realistic) living wall on the counter and the lower-half of the back wall. This adds an interesting touch of green, somewhat eerily supplemented by green lighting under the two horseshoe tables.

During my visit, Uncommon Ground’s 2.5 kg Diedrich roaster sat in the back of the store, but hopefully this is off-site by now, ready to spring into action. Until then, Uncommon Ground’s bespoke espresso blend (50% Brazil, 20% Sumatra, 30% Colombia) is being roasted by North Star. I tried it as an espresso, which I found quite bright, although far from being in the pulling-funny-faces category. It was quite acidic, with very much a roof-of-the-mouth taste. I suspect it goes really well in milk, but I was far too caffeinated to try it.

Starving when I reach Uncommon Ground, I was very taken by the bacon & egg brunch muffin. Inconveniently, I don’t eat meat, but the staff made it for me cheddar cheese instead of the bacon. The egg was scrambled with tomato relish, giving it an interesting kick. Needless to say, I hoovered it up and it was just what I needed!

December 2016: Uncommon Ground Coffee Roastery was the winner of the 2016 Coffee Spot Award for Best Lighting.

If you enjoyed this Coffee Spot, check out the rest of Cardiff’s speciality coffee scene with the Coffee Spot Guide to Cardiff.