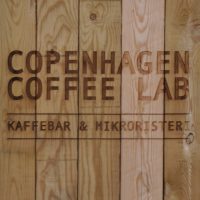 This is located right in the heart of Copenhagen, within sight of the famous Christiansborg Palace and a few steps from tourist central where the canal boat tours vie for your business. Despite this, it feels off the beaten track, aided by being tucked away in a basement, with just some tables on the pavement outside to advertise its presence. Well, that and an A-board. And a trike at the end of the street.

However, it’s worth finding, both for the space, and for the excellent coffee. The Copenhagen Coffee Lab roasts all its own coffee, with a pair of single-origins on espresso and, usually three more options on filter through V60, Kalita, Aeropress. The aim is to have an African and South American coffee on espresso and at least one of each on filter.

Whereas Copenhagen Coffee Lab’s Lisbon outpost has basement-like qualities, the original goes one better and is actually a basement. The hatch-like entrance on the street is flanked by four seats to the right while, to the left there are three tables, each with two chairs. In the middle, a steep flight of stairs leads down into Copenhagen Coffee Lab proper, which consists of a four separate, interconnected spaces.

Starting in the main room, the L-shaped counter is directly ahead. Four chairs line the top of the L, which houses the filter-bar and its EK-43 grinder. To the right, the bottom of the L has the pastries, till and two espresso grinders, the espresso machine itself sitting behind the counter, business-end facing you.

There’s not much more seating here: a two-person window-bar to the left of the steps and a couple of comfy chairs against the left-hand wall, opposite the end of the counter. Between them, a wide opening leads to the second space. Long and narrow, this has three tables, a four-person one to the right, a two-person one directly ahead and another two-person table tucked away under the window to the left. At the back, rows of alcoves against the wall house coffee/coffee-related kit for sale.

At the back of the main space, on the left hand-side, another opening leads to the first of two back rooms. Another pair of comfy chairs live here, while on the left, two four-person tables line a bench seat along the wall. Finally, as you enter this space, an opening to the right leads to the final of the four rooms, known as the boardroom. Long and thin, this occupies the space behind the counter and has a single, long communal table in the middle.

The Copenhagen Coffee Lab has concrete floors with white-washed walls and ceiling, punctuated by exposed wooden ceiling beams, which give it a lovely feel. Each of the four rooms has its own windows, so there is plenty of natural light. Although I imagine it could get quite loud when full, while I was there, it had a lovely, calm, relaxed atmosphere.

There was an Ethiopian Nano Challa and a Brazilian Fazenda Rainha on espresso, the later used in larger milky drinks (the Ethiopian is considered too acidic for large volumes of milk). I’d had this in Lisbon as an espresso, so tried it here in a flat white, rewarded with a very smooth, well-balanced flat white, the taste of the coffee coming strongly through the milk. If I did a Coffee Spot Award for Best Flat White, this would be an instant front-runner.

I also tried the Ethiopian as an espresso, which arrived in an over-sized up. I had a real blow-the-top-of-your-head-off moment with the first sip and it didn’t really calm down after that. There was nothing particularly wrong with it, just too much acidity for my palette, which dominated any other flavour notes. On another day, I’d have tried it as a cortado.

There are pre-made sandwiches (although these aren’t displayed, so you have to ask) and pastries. I paired my flat white with a toasted sour-dough cheese sandwich and my espresso with a croissant. The sandwich was surprisingly good (the barista was worried it would be a little bland; he only had ham and cheese, but did a special cheese-only version for me). The cheese had melted, giving it a wonderful consistency, contrasting with the crunchy bread, while a hint of mustard was just what it needed to bring out the flavours. Meanwhile, my croissant was very fine indeed, with a rich, flaky dough.