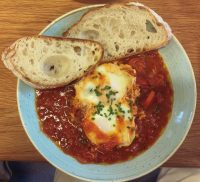 This Saturday Supplement is actually a two-for-the-price-of-one deal: it’s a Coffee Spot Update on what used to be my local, the Beany Green branch at Paddington (aka Sheldon Square, aka Little Venice), plus I take a look at Beany Green’s (relatively) new brunch service (available until 3pm, all-day at weekends).

From the summer of 2013, until the end of 2015, when my contract finished, I worked in Sheldon Square, just around the corner from Paddington Station. When Beany Green opened in early 2014, it immediately became my local, coffee trips from the office forming a vital part of my working day. Although it’s only been seven months since I left, Beany Green has made plenty of changes. There’s been an extensive refurbishment, while the opening hours have been extended into the evenings, when Beany Green morphs into a wine bar. Keen to check it out, I returned to my old haunt last weekend for coffee (Friday) and breakfast (Saturday).

Meanwhile, there have also been changes to the menu. Always known for its food, Beany Green has gone one step further with an impressive brunch menu. I tried this out at the end of March over in the Liverpool Street branch.

Before we start, a quick note about naming conventions: I’ve always referred to this Beany Green as the Paddington branch, having taken to naming the Beany Greens after the various mainline railway stations that they’re close to. However, these days, Beany Green goes with slightly more romantic names, so this one is Little Venice, while, for example, the Euston branch is known as Regent’s Place (which helps distinguish it from the kiosk on Euston station plaza which isn’t really a Beany Green anyway…).

Anyway, I digress. At first sight, not a lot has changed with Beany Green’s first branch (unless you count the parent of the whole chain, Daisy Green, in which case it’s the second branch). However, if you look closer, you’ll see a whole host of little changes. For example, there are now large, stone picnic tables and benches on the (astro-turf) lawn out front, while inside the seating has been changed/rearranged. A lot of this has to do with the move towards more brunches: the old tables where pretty high and you had to perch on bar-chairs/stools, while the new ones are more convention low-level tables, much easier for eating at.

The main entrance is still through the double doors on the left, which deposit you in front the counter, running most of the length of the (narrow) store. However, there are further changes at the far right-hand end, where Beany Green has been extended, with some extra tables arranged around a couple of comfy benches. This has also allowed the second set of double doors to be put into full time use as a second entrance/exit (handy if you’re popping in from Sheldon Square). Perhaps just as important, the extra space has been used to install toilets, so no more having to pop around the corner to Starbucks (not that this affected me much since I was only ever popping in from the office, but I know it put some people off).

Behind the scenes, there’s a new kitchen. Previously, Beany Green’s impressive cake and lunch offering came from a small corridor of a kitchen behind the counter, but now there’s a new underground lair (err, I mean kitchen) buried deep beneath Sheldon Square. I had a behind-the-scenes tour and it’s really impressive! The increased kitchen capacity is what’s enabled Paddington to go over to provide brunch seven days-a-week in addition to its usual lunch service (from 11.00 – 14.30).

The final change at Paddington is that Beany Green now opens late into the evenings all through the week. This is to allow for a move more into wine/spirits/cocktails, something which was pioneered at Liverpool Street (aka Broadgate Circle). Note that there’s no food in the evening: the kitchen closes at three o’clock during the week. On Wednesdays, Thursdays and Fridays, there’s also either live music or a DJ.

So, to the other point of this post: the Beany Green brunch. Is it all it’s cracked up to be? Well, I’d say yes, based on the breakfast I had at Paddington last weekend and on a bottomless brunch I had with three fellow-bloggers over at Liverpool Street at the end of March. The bottomless brunch, by the way, is a choice of one hot item and one cold item from the brunch menu, plus unlimited prosecco/mimosas/Bloody Marys (although the alcohol part of it was rather wasted on me, I’m afraid).

I took a blend of coffee bloggers with me: Daniel (Cups of Coffee London), Bex (Double Skinny Macchiato) and Jess (EatingEast). “Blend”, by the way, is the technical term for a group of coffee bloggers (a delightful term which we have Bex to thank for). Between us we sampled the Broccoli and Corn Fritters with avocado and bacon, the Beany Hash (which is no longer on the menu) and the Shakshouka (baked eggs in a spicy tomato sauce) which I had with sourdough toast. I thoroughly enjoyed my Shakshouka, so much so that I’ve started making it for myself at home now. You can also read what Jess and Bex made of the experience on their blogs.

When it came to the cold item (aka dessert), it was banana bread all around, except for Bex, who had the toasted coconut bread (which is excellent, by the way). When I say “banana bread”, this is not the typical slice of toasted Beany Green banana bread (excellent as that is). No, this is a Banana Bread Sandwich, two slices of banana bread topped with mascarpone and fresh berries, then drizzled in honey for good measure! It’s as awesome as it sounds.

When I popped into Paddington last weekend with my friend Keith, it was my turn to try the Broccoli and Corn Fritters, which were excellent, the fritters in particular going down well, although the addition of avocado to the mix really lifted the whole dish. Keith, meanwhile, had poached eggs on activated-charcoal sourdough toast. I forgot to take a photo of it, but fortunately my friend Keith has let me use one of his. While the sourdough (essentially black) looked particularly unappetising, Keith said that he thoroughly enjoyed it!

In all this fuss about the new space and the (admittedly excellent) brunches, let’s not lose sight of the coffee, which, as ever, is from Winchester’s The Roasting Party. There’s a bespoke espresso blend, plus decaf, and a single-origin bulk-brew filter if you fancy a change. I usually have a flat white (although I’ve also enjoyed the odd espresso or two over the years) and on my return last weekend, it was no different. I can report that my flat white was as excellent as ever, the Roasting Party blend always going well with the milk, producing a particularly sweet drink.

December 2016: Beany Green, Paddington was a runner-up for the 2016 Best Breakfast Award.

Disclaimer: last year, Beany Green launched a bond to fund future expansion. I invested in this bond, and, like all bond-holders, receive free coffee as a reward, plus the brunch I had at Liverpool Street was also a bond-holder reward (although I paid for my breakfast at Paddington). My decision to write about Beany Green was in no way influenced by my investment.