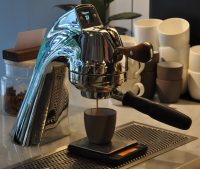 I first discovered Modern Society in March when I was invited by roasters, Assembly, to a talk by Maxwell Colonna-Dashwood on speciality coffee in capsules. Modern Society, on Redchurch Street in the heart of Shoreditch, is a life-style store with an excellent coffee bar at the front, one of a growing band of speciality coffee shops sharing space with other businesses. Sometimes the coffee side can be a separate business, although in this case, it’s fully integrated with Modern Society.

The result is a delightful, open, relaxed space, although if you think the coffee bar might be a bolt on or after-thought, think again. Modern Society has gone with cutting-edge roasters, Assembly, and has, to my knowledge, the first complete Modbar installation in the UK, with espresso, steam and pour-over modules. There’s also batch-brew through a Moccamaster.

To go with the excellent coffee, served from a very minimalist/concise menu which eschews names and simply lists sizes (espresso, black, 4oz, 6oz, 8oz), Modern Society also offers loose-leaf tea (prepared using the Modbar’s pour-over module) and a similarly-concise food menu, with breakfast and lunch options, all prepared on the counter, where you can sit and watch what’s going on if you like.

Modern Society cuts a dashing figure on Redchurch Street, described by no less an authority than Jess, of EatingEast fame, as her favourite street in London. On the north side of the (relatively) quiet street, the broad front of Modern Society is all glass, the door on the left. As a bonus, the left-hand of three windows can slide over to the right in good weather, connecting the first of the tables with the pavement.

Inside, Modern Society is a large, spacious lifestyle store, although if I’m honest, I never ventured much beyond the coffee operation at the front. The counter, short-side facing the door, is on the left, while three generous round tables line the window to the right. If you don’t fancy that, there are two benches on the pavement in front of the centre and right-hand windows. Best of all, you can perch at one of four bar stools on the counter’s long-side and watch the Modbar in action.

About the Modbar. It’s the first one I’ve seen in the wild, so to speak, in the UK, although I came across several on my recent USA trip. The Modbar, and similar systems, might be the future of espresso, replacing a single, hulking machine with a modular system. This means that you can hide the bulky elements (boiler, pumps), leaving just the group heads, rising from the counter like gleaming beer taps. For me, this is crucial, removing a barrier (the espresso machine) between barista and customer, allowing greater interaction.

Take Modern Standard’s set-up as an example: you walk in through the door and are confronted by the counter, housing the Modbar group heads, behind which stands the barista. Were this a typical espresso machine, it would be an immediate barrier. As it is, you can stand there and see your coffee being made, nothing hidden from view.

Although there’s at least one other Modbar in the UK, as far as I know, Modern Society’s pour-over module is the UK’s first. This automates pour-over (Modern Society uses a Chemex, but you can use any pour-over method) by delivering pre-set volumes of water at defined intervals (all programmable, along with the temperature).

Unlike some of the fully-automated systems at this year’s London Coffee Festival, I’d describe the Modbar as semi-automatic. Blooming still has to be done manually, and although you can leave the Modbar to its own devices after that, in every installation I’ve seen, there’s been some manual intervention. When I visited Modern Standard in March, the technique was to stir the coffee between pours. Now, however, the nozzle at the end of the hose is manually moved around as the water is dispensed (similar to pouring with a gooseneck kettle) to provide better agitation.

Modern Society usually has two single-origins, currently a Guatemalan and an Ethiopian, on filter, with one available as batch-brew through the Moccamaster. Having tried (and enjoyed) the filter on my first visit, I went with the espresso, Assembly’s standard blend. On its own, it was far too bright for my palette, so I had a cortado (aka 4oz) instead, the milk nicely taking the edge off of it. In my experience, bright coffee often fights the milk, but this one goes superbly well in milk, with the complexity of coffee still managing to come through.

Before I leave you with the table, here’s a bonus gallery with the Modbar in action.