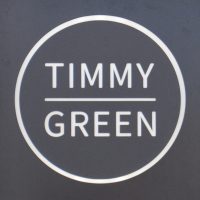 Timmy Green, the latest addition to the growing Daisy Green/Beany Green collective, opened at the start of the year. It was, from the beginning, a fully-fledged restaurant as well as a rather splendid coffee shop. When I visited and wrote about Timmy Green in March, it was only as a coffee shop. This Saturday Supplement is going to redress the balance and consider Timmy Green as a restaurant.

Layout-wise, Timmy Green is much the same as ever, although there have been a few changes since I was there in the spring, which has made the downstairs feel even more like a restaurant than a coffee shop. The grand piano in the corner has gone to make way for more tables, while the window-bar and high tables to the left of the door have suffered a similar fate.

When it comes to food, Timmy Green serves breakfast, lunch, brunch and dinner, complete with desserts, wine, beer and cocktails. And, of course, Roasting Party coffee. Not that Daisy/Beany is a stranger to food. The original Daisy Green, plus the Paddington and Liverpool Street Beany Greens, have a reputation for innovative brunch menus, but in Timmy Green this has reached its logical conclusion.

On the corner of Buckingham Palace Road and Bressenden Place, Timmy Green occupies both levels of the ground floor at the north-eastern end of the Nova development next to Victoria Station. When I was there in March, Nova was only partially complete, and now, five months on, it’s looking stunning. What I hadn’t realised is that block containing Timmy Green was just one of two, with a second block, again all glass, concrete and steel, off to the right, a broad, pedestrianised walkway running between the two.

Full of restaurants and bars, Nova’s also home to the likes of Notes and Crosstown Doughnuts in addition to Timmy Green, making it a real addition to the area, although I rarely find myself in and around Victoria. Indeed, I was only passing through this time because chaos caused by the re-engineering of Waterloo Station. However, I was suitably impressed!

I ended up going for dinner twice, once an impromptu visit while passing through last Monday and the other, a more planned return, the following Friday (yesterday) for dinner with my friend Amita. I had, of course, tried the food before, popping in for lunch on my visit in March when I had the hot and healthy breakfast greens with a side of buttermilk blueberry pancakes. You can see what I made of them, along with a full description of Timmy Green, in my original write-up.

On my return, I started with a customarily excellent decaf flat white before tucking into the seasonal dinner menu with a starter of burrata, served with three types of tomato (red and green heirloom, plus sun-dried) and (cold) charcoal toast. If you don’t know burrata, it’s very similar to mozzarella, but with the addition of cream. So think of a particularly rich and creamy mozzarella and you’re not too far off! The heirloom tomatoes were also excellent, firm and almost crunchy, while the sun-dried tomatoes burst with flavour.

I followed this with the fire-roasted aubergine and a side of roasted sweet potatoes drizzled in yoghurt. The aubergine was excellent, but what really made the dish were the accompaniments, the highlight of which was the crispy rice (which was really crispy!). A word to the wise: you can also have this as a starter, although the accompaniments are different.

On my return, four days later, I skipped starters in favour of dessert. Amita had the fire-roasted aubergine that I’d had on Monday. She enjoyed it as much as I did, while I had the tuna steak which was excellent and done to perfection. Served with an excellent garden salad, there was also salsa verde and crushed avocado, adding an interesting combination of flavours and textures in contrast to the tuna.

The dessert I’d saved myself for was the Melbourne Mars Bar Cheesecake Ball. I’d had this before in a previous guise, when it was an actual cheesecake. Here, in an interesting twist, the constituent parts of the cheesecake, complete with chunks of Mars Bar, were wrapped in double cream, then encased in a chocolate shell, hence the “ball” in the name. As if that wasn’t enough, the ensemble was surrounded by crushed chocolate biscuit (the cheesecake base) and strawberries. Either would have been awesome and perfectly adequate desserts in their own, but together they were to die for!

Disclaimer: Beany Green launched a bond in 2015 to fund future expansion. I invested in this bond, and, like all bond-holders, receive free coffee as a reward, plus the two dinners I had at Timmy Green were also a bond-holder reward. My decision to write about Timmy Green was in no way influenced by my investment.

2 thoughts on “Dinner at Timmy Green”