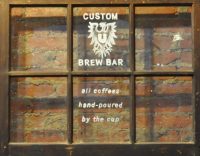 The first ever speciality coffee shop I visited in Philadelphia was Ultimo Coffee’s Graduate Hospital branch on Catherine Street. It is therefore a little ironic that it’s taken me two years to visit the original, Newbold, on South 15th Street, where Ultimo started back in 2009. As is usual in these cases, the loss is all mine.

Ultimo, rather unusually, shares the space with Brew, a speciality bottle beer company, with Ultimo and the coffee taking the front of the store and Brew taking the back, the two sharing the seating. Ultimo, also unusually, has a strong focus on pour-over coffee, something which is slowly catching on in the US, but which Ultimo has championed from the start, using BeeHouse drippers to serve an interesting selection of single-origin filters to go with two more on espresso.

During my visit in February, Counter Culture was the house-roaster, with occasional guests on espresso and filter. However, since then Ultimo has started roasting its own coffee (with the roastery based at Newbold), which is now available on-line and in both stores. If you’re in a hurry, there’s bulk-brew until 11am, while for those with a sweet tooth, there’s a selection of cake.

From the outside, Ultimo Coffee looks like a pretty compact spot, perched on the corner of South 15th and Mifflin Streets in south Philadelphia. Certainly it looks a lot smaller than the Graduate Hospital branch on Catherine Street branch. However, appearances can be deceptive since Ultimo goes quite a long way back along Mifflin Street, ending up maybe four times longer than it is wide. Since it’s on a corner, there’s plenty of light despite these dimensions. The narrow side, which looks out over South 15th Street, is entirely glass, while about two-thirds of the Mifflin Street façade is given over to windows.

The door is a cut-off on the corner, with symmetrical window-bars to the left and right. Even the counter mirrors this, with a cut-off corner holding the La Marzocco espresso machine, which faces the door. To the right of this is a row of BeeHouse filters, then comes the cake, before you reach the till at the far end, where you’ll also find the coffee menu. Apart from a solitary bar-stool and a two person table in front of the La Marzocco, that’s it for seating in the front part of Ultimo.

However, beyond the counter, Ultimo morphs into the Brew beer shop, which is where you’ll find the remaining seating. Starting directly opposite the end of the counter, there’s a row of three two-person tables lining the window on Mifflin Street, an up-and-over affair, which, in the warm weather, can be opened up to the street. Beyond this are three more two-person tables and another in the corner, plus a line of five two-person tables down the centre.

This is definitely no longer a coffee shop (although you can sit down here with your coffee). The entire left-hand wall is given over to bottles of beer, as well as 10 beers on tap which you can taste. You can either buy your beer to take home, or you can grab a seat and drink it there and then. Either way, you need to pay at the separate beer counter/till right at the back, tucked away in a corner (Brew is a separate business).

When I was visiting in February, Ultimo had yet to start roasting its own coffee. Back then, the guest espresso was an Ethiopian Guji from Tandem Coffee Roasters, which was also available as a filter, so naturally I had to try both.

As an espresso, it was really fruity and sadly way too punchy for my palette. It really hit me in the back of the mouth though, rather than the sides, but despite this, I was pulling funny faces as I drank it. Switching to the pour-over, I found that it was a little too hot at first, but as it cooled, it was much more to my taste, less punchy and with more balance, although retaining its fruity notes.

I paired this with a slice of the raspberry crumble, which was lovely. A tray bake, with a pastry base and sides, it was then covered with raspberry jam and topped with crumble, rather like a crumble version of a Bakewell Tart. It was simultaneously really sweet, crunchy and tasty. I enjoyed it so much that I may have to work out how to make it myself!

As well as the Graduate Hospital branch, you can also see what I made of Ultimo’s new branch, Rittenhouse, when I visited in March 2018.