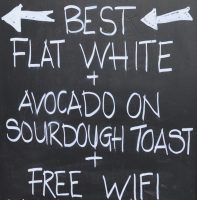 Wander down Cheapside, away from St Paul’s Cathedral, and you’ll find a branch of Hummus Bros. on the left-hand side. This, in itself, is unspectacular since Hummus Bros. is a familiar sight in London. However, this one’s special: look closely and you’ll see that it houses none other than Silhouette, a speciality coffee shop run by one of coffee’s nicest couples, Lee and Syirin (although these days Syirin’s rarely in the shop).

The space itself is nothing special: long and thin with a makeshift counter two-thirds of the way down on the right, housing Silhouette’s trusty La Marzocco espresso machine. From this surprisingly small space, you’ll find Lee dispensing excellent espresso-based drinks from Notes and occasional guests (although rumour has it that if you ask nicely, you can get pour-over, although it’s not on the menu). Even more impressive is the small, but tasty, toast-based menu & some excellent cakes.

July 2017: Sad news. Silhouette has closed. Not sure if Lee and Syirin will be back with another venture, but I certainly hope so!

There’s a backstory to Silhouette, which was originally in Hackney. It was, for me, perfect: a friendly, neighbourhood café with amazing coffee, run by Lee and Syirin (who hail from Wales and Malaysia respectively). I’d helped fund it through a Kickstarter, so when, towards the end of 2016, another Kickstarter appeared, for a second Silhouette, I immediately backed it.

Not long after, the second Silhouette opened on Cheapside, and, not long after that, the original Silhouette surprised everyone by closing. It turned out that running the two shops was trickier than Lee and Syirin had originally thought, plus, Hackney, as lovely as it was, was tucked away off a main street and pulled in very little passing trade. Lee told me that within a few weeks, Cheapside was making more than Hackney ever had, with much lower overheads. Crunch time came when Lee and Syirin received an offer on the Hackney lease that they couldn’t refuse. So they didn’t.

Cheapside is long and thin, with a simple layout. The door’s on the left, windows, complete with small window-bar, ideal for watching London go by, to the right. A long bar runs up the left-hand wall, while on the right, there’s a row of tables, ending at Silhouette’s counter. There’s another long table beyond that on the right, then comes the Hummus Bros. counter, occupying the full width of the back of the store. And that’s it. Anyone, by the way, can sit anywhere; there’s  no Silhouette/Hummus Bros. dvide. That Silhouette’s here is simple: the franschise owner wanted to provide speciality coffee and invited Silhouette in.

The coffee offering’s simple: there’s a single-origin espresso from Notes, a Brazilian Cachoeirinha during my visit. As an espresso this was gorgeous: fruity and complex, it rewarded me with every sip, holding its own right to the end. I also tried it as a flat white, which was very smooth and surprisingly different, the coffee and milk perfectly complimenting each other.

Since Lee already knows me well, I’d sent a spy, fellow-blogger Alexandra, to scope the place out. Going by the handle AKBoogie on social media, she’s perhaps best known for her 365 London Cafés project: follow her on twitter and Instagram as she visits a (London) café every day for a year. She’d already been there for an hour when I arrived (my previous appointment overran horrendously; just between you and me, I’m impressed she’s still talking to me!) so she must have liked it!

I also tried the avocado on toast, which was excellent. The food menu’s not as extensive as it was at Hackney, but if you like things on toast/bagels, you’ll be fine. Finally, Lee offered us something made by one of Syirin’s aunts, an excellent pancake-type arrangement with a sweet filling. Had I made any notes, I might have been able to tell you more!

In the interests of disclosure, I should point out that I backed the Kickstarter campaign to set up original Silhouette as well as the second Kickstarter, which allowed Lee and Syirin to open Cheapside. This did not influence my decision to write about either branch of Silhouette.