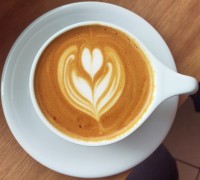 Silhouette joined a growing number of speciality coffee shops and roasters in the Hackney area, opening in February last year. Located just off Mare Street (close to the now-closed and sadly missed Look Mum No Hands!) it’s close to the likes of Climpson and Sons and others at London Fields (with the roastery just around the corner) and Terrone at Netil Market.

Silhouette itself is a delightful little spot, south-facing and on a corner, so it catches the sun, both from the generous windows at the front, as well as from the equally-generous windows along the west-facing side. Inside, the focus is on the coffee, where Silhouette offers both espresso and pour-over (using the Kalita Wave), filling its hoppers with whatever takes the fancy of owners Lee and Syirin (Syirin had just returned from a trip to Berlin, so the shelves held a smattering of bags from the likes of Five Elephant and Concierge (a new one on me).

October 2016: Some good news and some bad: Lee and Syirin ran a successful Kickstarter to fund a second coffee shop, but in an unexpected twist, the original Silhouette has had to close with immediate effect. It will be sadly missed.

Silhouette is the brain-child of Lee and Syirin, from Wales and Malaysia respectively, who previously ran a pop-up in China Town during 2014. I’d met Lee at the London Coffee Festival in 2013, and since we’d also conversed a bit on twitter over the years, he recognised me the instant I walked in the door.  So much for going incognito… In fact, with the exception of Notes, Canary Wharf, I was recognised in every coffee shop I visited that weekend!

There’s not a lot to Silhouette (in a good way). Its square floorplan promotes a simple, open layout, with the door at the front on the right and the counter at the back on the left (behind which is the kitchen). In between, there’s a modest, communal table in the centre of the room (although that maybe going/being replaced fairly soon), with the remainder of the seating around the other three walls. There’s also a bench outside the front window on Bayford Street.

The bulk of the seating is provided by two window-bars, one for each window. The one to your left, as you enter, looks out over Bayford Street, and has three high-backed bar-chairs, while the one along the front part of the left-hand wall is shorter, with two chairs, looking out onto Elizabeth Fry Road. A solitary armchair sits at the end of this window-bar, while on the opposite wall (ahead of you as you enter) is a pair of (mismatching) armchairs sharing a coffee table. Silhouette is small (and cosy) enough that you can sit and chat, but it’s not so small that you can’t mind your own business if you prefer. Having had my cover blown on entry, I went for the sit and chat option.

Silhouette is a product of Lee and Syirin’s passion for coffee. They only take small batches of espresso and filter beans from a rotating cast of roasters (with an emphasis on southwest England and the Welsh borders). The coffee goes into the hopper and when it’s gone, it’s gone. I spectacularly failed to make a note of what was on espresso, save that it was from Assembly, the first time Silhouette has had its beans. All I can tell you is that it was lovely in my flat white and went very well with my sour dough toast, which I had for breakfast.

The filter was from James Gourmet (from Ross-on-Wye), with four single-origins on offer (it’s still rare to find James Gourmet in London). These were joined by a couple of bags from Workshop and four from the aforementioned Berlin roasters. Silhouette prefers the Kalita Wave, but will also use the Aeropress and Chemex if you ask nicely.

There’s also food, which is all freshly-made on site, with the bread bought in from a nearby bakery. One or two Malaysian dishes appear on the lunch menu during the week. Silhouette caters mostly to the immediate neighbourhood and Syirin summed up the philosophy as “we only make things we’d eat ourselves”.

There’s a small selection of pastries, plus Kuih Bakar, a moist Malaysian cake made of coconut milk, flour, eggs, sugar and pandan leaf, which gives it its distinctive (disturbing?) green colour. Despite my misgivings, I took a slice home with me, consuming it the next day: it was excellent!

December 2016: Silhouette was a runner-up for the 2016 Most Passionate About Coffee Award.

February 2017: You can see what I made of the new Silhouette inside Hummus Bros. on Cheapside.