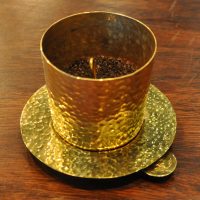 In the run up to my current trip, I’d heard an awful lot about the Vietnamese taste for coffee. There’s no doubt that the Vietnamese like their coffee. There are coffee shops everywhere, open from first thing in the morning to last thing at night, ranging from tiny independent hole-in-the-wall operations right through to massive national chains. Starbucks is also here in strength.

However, volume of consumption is one thing, but what about the quality? Yes, you can find speciality coffee in Vietnam, and pretty good coffee at that, but I’m talking about traditional Vietnamese coffee, made using a cup-top metal filter (cà phê phin), strong and sweet, served either hot or over ice, often with condensed milk.

I confess that this did not appeal to me. I gave up sugar in my coffee over 25 years ago and the idea of coffee with condensed milk makes me shudder. I’m also no fan of cold coffee, except a good quality filter that has been left to go cold. Cold brew, coffee over ice, anything like that, I really don’t enjoy.

That said, I’m not one to dismiss an entire coffee culture out of hand, so I thought I’d better give it a try…

Before we get started, let’s have a little bit of context. A long time ago, in the Coffee Spot’s first year, I wrote a piece in defence of Coffee in Paris. It was written in reaction to what I perceived as the dismissive attitudes towards other coffee cultures from some people in speciality coffee. It was a defence of Parisian coffee, driven in part by nostalgia. Since then my tastes have moved on and I am, if I’m honest, far less tolerant of what I perceive to be bad coffee.

I sometimes wonder if I would still write such a piece and yet, in many ways, the argument still stands. Coffee, ultimately, is a question of taste. Who am I to define others’ tastes for them? A good example is Robusta (as opposed to Arabica) coffee. Having not minded (and in some cases quite liked) some Robusta five years ago, my tastes have evolved to the point that I really don’t like it. However, that doesn’t automatically make it bad coffee, it just means it’s not for me.

All of this means that you can’t just dismiss a coffee culture out of hand, certainly not without trying it. Even if you think you’ll hate it. So, being in Vietnam, I thought I really ought to try traditional Vietnamese coffee made with the cup-top filter known as a cà phê phin.

My first experience of traditional Vietnamese coffee was actually accidental. I’d gone to a café called The Mockingbird, which only serves traditional Vietnamese coffee (it’s a lovely spot, by the way, which sits on the top floor of a ramshackle old building). I thought I’d ordered hot coffee with condensed milk, but what I actually got was cà phê sữa đá which is the iced version. As I said at the time, it tasted reasonably good, but it’s not what I think of as coffee.

It had a dark, chocolately/coffee taste and yes, it was extremely sweet. The problem is, it was so laced with sugar/sweetness that it’s hard to make any assessment of the actual coffee. In fact, I rather hope it’s a fairly cheap, strong coffee: I’d hate to think of something delicate or bursting with natural flavour drowning in all that sugar/condensed milk!

Now, none of this is to say that there’s anything wrong with this sort of coffee. Far from it. It’s just not what I recognise as coffee. In fact, in my head, I thought of it as a kind of coffee-flavoured milk shake. It also means that I lack the tools to access the quality of the coffee/drink, leaving me with no idea if what I had is a representative example of Vietnamese coffee.

My next experience of Vietnamese coffee came the following day at breakfast in my hotel, when I was served a traditional (hot this time) black coffee, made using a traditional cà phê phin. As I said at the time, if this is representative of Vietnamese coffee as whole, I see why it’s usually drowned in condensed milk! It wasn’t unpleasant enough that I couldn’t drink it, but I had to push myself to finish the cup. It was bitter, sweet and really not my sort of thing.

However, I was determined not to give up, so later on that day, when I was in the very lovely Shin Coffee, I saw cà phê phin on the menu and thought I should give it a go.

You can see happened after the gallery.

A little bit of background, before we get to the actual coffee. Shin Coffee (one of a small chain, which roasts all its own coffee) is very much in the speciality coffee shop mould: it even has “speciality coffee” written on the window. It’s so on-trend in look and feel that I felt that I could be walking into a coffee shop anywhere in the world. Not that this is a criticism, particularly as I like the look.

Even better, from my perspective, is that Shin only roasts and serves Arabica coffee, making heavy use of Vietnamese-grown coffee (Vietnam is the world’s second-largest coffee producer, by the way, although most of it is Robusta) which it blends with other coffee from around the world.

Before I plucked up the courage to try the cà phê phin, I had a rather excellent cappuccino, made with a blend of Ethiopian and Vietnamese coffee. With that behind me, I thought I’d give the cà phê phin a go. If anywhere was going to have good traditional coffee, it was going to be here.

Before we get to the taste and what I made of it, it’s worth describing how the cà phê phin is made, at least at Shin. In essence, it’s a pour-over method, but with a very slow filtering process. I didn’t ask about the grind size, but it looked maybe slightly coarser than I’d use for my Aeropress. The beans were also a pleasing shade of brown, so they’d not been over-roasted.

Shin, being the speciality coffee shop that it is, wasn’t taking any chances, so everything was measured: the coffee was weighed, the water was at the correct temperature and so on. As with any pour-over method, there’s a first pour to let the coffee bloom, then a second pour to top it up. However, the filter must be really fine because nothing filtered through during the first pour and it was only maybe a minute after the second pour that the coffee finally started dripping through (I discovered later that there are actually three filters involved, which explains why it took so long!). It speeded up a little after this, but at no point was it pouring through. Finally it slowed down again at the end. I did take a look at the coffee in the filter as it was brewing and it looked like sludge…

So, what did it actually taste like? Well, I have to say it was nothing like I was expecting. The coffee itself was a blend of Indonesian and Vietnamese beans and it tasted very different from any Indonesian or Vietnamese pour-over I’ve ever had (I’d tried two Vietnamese Arabica pour-overs on the previous day at The Workshop Coffee and Vietnam Coffee Republic).

In fact, it didn’t quite taste like any coffee I’d tasted before. It was rich, almost sweet, but not fruity, with very much a front of the mouth, almost tip of the tongue, taste. Much to my surprise, I found that I really liked it. A very clean, mellow cup, it would, in my opinion, be a crime to drown this particular coffee in condensed milk!

So, what to make of it all? Well, the first thing to say is that there’s nothing intrinsically bad about the cà phê phin, the traditional Vietnamese filter method. Like any other method, it all depends on the coffee you use and the care you take in preparation.

Will I ever be converted to the iced versions or to taking my coffee with condensed milk? Well, that’s a question that I answer in Part II of my exploration of traditional Vietnamese coffee. In the meantime, if I was offered another coffee like this, I’d happily drink it any day.

25 thoughts on “Vietnamese Coffee Part I”