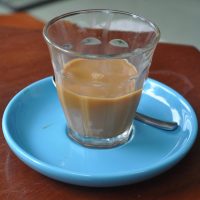 Welcome to the second of my three-part exploration of traditional Vietnamese coffee. As I explained in Part I, I’ve been exploring the local coffee culture during my time in Vietnam. The Vietnamese are volume coffee drinkers: I’ve not been anywhere with this many coffee shops! They are literally on every corner, often open from first thing in the morning to last thing at night.

However, traditional Vietnamese coffee, made using the cà phê phin, a cup-top metal filter, served either hot or over ice, and often with condensed milk, has a reputation for being strong, sweet and heavy on the Robusta. Sadly, much of that does not appeal to me, but, despite my initially scepticism, I found, to my surprise, that I liked many aspects of both the culture and of the coffee itself.

In Part I, I shared my initial, rather unsuccessful, forays into traditional Vietnamese coffee, followed by my conversion when I tried the combination of speciality coffee and the cà phê phin. In this, Part II, I continue my exploration with coffee over ice plus coffee with condensed milk. Finally, Part III covers my experiments of using my own cà phê phin to make coffee.

As I recalled in In Part I, my first experience of traditional Vietnamese coffee was at The Mockingbird in Ho Chi Minh City, where I accidentally ordered cà phê sữa đá (iced coffee with condensed milk). While not unpleasant, it’s not really what I think of as coffee (in the same way that I don’t consider a 20oz latte with a shot of syrup to be coffee).

My next experience came the following day at breakfast in my hotel, when I was served a traditional (hot) black coffee. This was altogether a less pleasing experience: bitter and sweet, I could see why you might want to drown that in condensed milk! However, not to be deterred, I tried again at the very lovely Shin Speciality Coffee, where I had a blend of Indonesian and Vietnamese Arabica beans, made using a cà phê phin. Much to my surprise, I found that I really liked it. Rich, almost sweet, it was a clean, mellow cup, quite unlike anything I’d had before. I followed this up at Mia Coffee in Hoi An with another speciality coffee made the traditional way, this time with a blend of Vietnamese Arabica beans. Again, the result was a lovely cup of coffee.

I should say that this was not the most high-class establishment, chosen largely because it was next to the station, which meant that my (huge) rucksack and I wouldn’t have far to go in the heat when it came time to catch my train. I should also say that my previous experiences with any sort of cold coffee (other than a good filter left to cool) have not ended well.

Bearing all that in mind, plus my experience of coffee at the hotel, I did not approach my drink with anything like confidence. One sip, however, changed my mind. Who’d have thought it? I really enjoyed that damned thing!

The ice, it appears, takes the edge of the coffee’s naturally bitterness and, while it was still strong and bitter, it wasn’t unpleasantly so. What’s more, the coffee had a syrupy mouthfeel and a little sweetness to it that was lacking in many of the hot ones I’d had before then. Above all, it was incredibly refreshing.

Buoyed by this entirely unexpected success, I repeated the experiment the following day at a café in Huế, chosen on the entirely reasonable grounds that it was, once again, 35°C outside and this was the only place with air-conditioning. I thought I’d ordered another cà phê đá, but instead I got an espresso with a glass of ice on the side.

This worked to my advantage, though, since it meant that I could try the coffee first (strong, bitter and laced with Robusta) before pouring it over the ice. The resulting transformation was amazing. The cooling effect of the ice takes the bitterness away, allowing the coffee to develop a hitherto unforeseen sweetness. The result was another very drinkable, refreshing cup of coffee. I was, and still am, flabbergasted!

Finally, I wanted to try speciality coffee over ice, so while I was at The Caffinet in Hanoi, on another sweltering day, that’s just what I did. This was made with a dark-roasted Arabica bean from Vietnam, roasted by La Viet. The coffee was filtered separately then poured over ice to serve, which allowed me to try the hot coffee first.

This was excellent, not as syrupy or sweet as others I’d tried and, surprisingly, I enjoyed it cold too, which brought out more of the flavours, but without the unique taste that cold brew coffee has (which I don’t like). That said, I preferred it hot, but in Vietnam’s climate, I can see the attraction of having it over ice!

So that’s coffee over ice done with. What about those other great staples, coffee with egg and coffee with condensed milk? You can see how I got on with those after the gallery.

Keen to continue my exploration, while I was in Hanoi at the Old Town Cafe, I decided to try cà phê trứng (literally “egg coffee”, traditional Vietnamese coffee with a topping made of whisked egg yolks, condensed milk and sugar). This was served in a glass, a layer of coffee at the bottom, the egg mixture floating on top. This, if you want my advice, is the best way to drink it. I did try mixing the two layers, but they quickly separated again.

I can’t bring myself to think of this as coffee. It’s more like a liquid pudding than anything else and, when viewed as such, I found it very pleasant. The top layer was rich and creamy like a milkshake, while the coffee was traditionally Vietnamese, strong and bitter. I found that the best way to drink it was by sipping the coffee through the egg layer, where the coffee’s bitterness neutralised by its sweetness.

Like the cà phê sữa đá (iced coffee with condensed milk) that I accidentally ordered at The Mockingbird at start of my trip in Ho Chi Mihn City, I’m not against this sort of thing: it’s just not really for me.

Fianlly, to complete the set, I had a cà phê sữa (nóng), traditional (hot) Vietnamese cup-top filter coffee with condensed milk. I wanted to try this when it was made with speciality coffee, so I ordered one at Hoi An’s wonderful The Espresso Station. I’d already had an espresso there, establishing the quality of the coffee (a blend of Vietnamese Arabica beans), so it was the perfect place to try a traditional coffee (made using the same blend) with condensed milk.

The way The Espresso Station serves its coffee with condensed milk worked in my favour. Starting with a layer of condensed milk at the bottom of the glass, the process is identical to that used for a (hot) black coffee. The dripper is placed on top of the glass and the coffee drips onto the milk, which means that the two don’t mix, allowing you to taste the black coffee before stirring in the milk.

Naturally, that’s exactly what I did. The unadulterated coffee was like a strong filter coffee, and, compared to the one that I had at Shin Coffee, less naturally sweet, but just as good. So far, so good. I then mixed in the condensed milk, which is where it all went a bit wrong…

The resulting drink wasn’t unpleasant, but I didn’t really see the point. Although I could taste the coffee and, I suspect, it tasted a lot better than something with a Robusta or dark-roasted coffee as a base, the taste was still overwhelmingly sweet. In my mind, this is similar to taking a great filter coffee and dumping a load of sugar in it. Or milk for that matter.

I got into a bit of trouble on twitter for describing this as “ruining” good coffee, but I stand by my initial reaction/description. As I’d noted at Shin Coffee, when the coffee itself is this good, drowning it in condensed milk is, to me, a crime. This isn’t like a flat white or cortado, where the milk is in harmony with the coffee and, if done really well, can bring out new flavours. For me, at least, “drowning” is the correct word, because the sweetness overwhelms everything else.

Now, before I get into even more trouble for dismissing an entire coffee culture out of hand, let me say that I do understand why the Vietnamese developed this taste for condensed milk. When coffee was introduced in the 19th century, refrigeration was in short supply, hence condensed milk made a good alternative to fresh milk.

All I’m saying is that when the coffee tastes this good on its own, you don’t need to put anything else into it. That said, if you like your coffee with condensed milk, then go for it. Don’t let me, or anyone else, tell you otherwise. From the day I started the Coffee Spot, I’ve been saying that if you are making coffee you like, then you’re doing it right.

So, to summarise, I’m still a fan of the traditional Vietnamese cà phê phin for making hot, black coffee using good quality beans (just as I’m a fan of espresso, made with good quality beans). Much to my surprise, I’m also a fan of cà phê đá (black coffee over ice) even when I’m not a fan of the initial hot coffee, but when it comes to adding condensed milk, hot or cold, or egg for that matter, let’s say it’s really not the drink for me.

If you’ve enjoyed Parts I and II, take a look at Part III, where I try my hand at making my own coffee with the traditional cà phê phin that I bought at The Espresso Station.