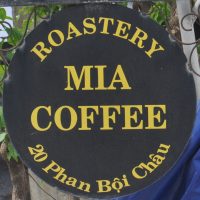 Mia Coffee is in Hội An’s French Quarter, east of the old town, another recommendation from the tag team of Bex (Double Skinny Macchiato) and Simon (Fancy A Cuppa). Set back a decent way from the road, Mia Coffee occupies a low, single-storey building with a small, recessed terrace. Inside, the single space is open to the A-framed roof. Like The Espresso Station, it doesn’t have air-conditioning, relying on fans to keep things cool. It also bucks the usual Vietnamese trend of staying open until late at night, closing at five o’clock.

Like most of the independent coffee shops I’ve come across in Vietnam, Mia Coffee is a roaster as well as a coffee shop, championing links with Vietnamese coffee growers and only serving Vietnamese coffee. Unlike some, the range on offer is limited, with a single Arabica blend for espresso and traditional cup-top Vietnamese filter, plus  another for use at home, both available in retail bags.

A word of warning: Mia Coffee’s done so well that it’s outgrown its current premises and is moving. If all goes well, come October, Mia Coffee will be across the road in a new, purpose-built café/roastery that was under construction during my visit.

Mia Coffee’s current location is in a small parade of shops, occupying a small, square space roughly in the middle. Set back from the road, there’s a small terrace under three flat arches, supported by yellow, plastered columns. The doors are in the central arch, while there’s a solitary table to either side, sheltered from the sun and far enough back from the traffic. However, Mia Coffee’s south-facing, so it can still get very hot out here! I started outside, but quickly moved into the relative cool of the interior, where six fans, all going continuously, made things tolerable!

Inside, there’s a table at either window, left and right of the door, probably the best compromise between sitting outside and being cool. There are more tables along the walls to either side, one at the back on the right, another at the back on the left, all seating three people. The counter’s at the back, but off to the left, up a step, a short corridor leads to the kitchen, with a two-person table on the left. Finally, in the middle of the room, three two-person tables have been put together in a row running front to back down the centre.

Mia Coffee has full table service, which I’m starting to expect in Vietnamese coffee shops. As always, the service is excellent, with a glass of water arriving at your table along with the menus. You only need go up to the counter right at the end to pay, or potentially to choose your cake/ice cream.

The décor’s simple, but effective, with white-washed walls and a tiled floor. The room’s open to the A-frame roof, with two pillars at the back, directly in front of counter, holding up the roof and various beams. However, three panels of black mesh netting hang from ceiling, each holding three lights, which means that it doesn’t feel quite so open.

All Mia’s coffee is grown in the Dalat region of Vietnam and roasted on-site. If you’re hungry, there’s a small selection of panini, hot dogs and sandwiches, which are all made in the kitchen at the back. There’s also a select range of mouth-watering home-made cakes and, given the climate, some very welcome ice cream too.

Having not had a milky coffee for a while, I started out with a flat white, which turned out to be on the generous size, but with some amazing latte art, the pattern holding all the way to the bottom of the cup. The resulting drink was very smooth, the coffee and milk going well together.

I’d have liked to try the espresso on its own, but in the spirit of keeping on exploring the local coffee culture, I decided to have a traditional cup-top filter instead (made with the same blend). This was brought to my table to brew, which made for fascinating viewing, particularly as my coffee was filtering into a glass, rather than a cup.

It took about 30 seconds for the first drip to come through, and another 30 seconds for the second, after which it speeded up a little, but at no point could the coffee said to be pouring through. The resulting coffee was pretty decent though, with a rich, earthy taste, although it lacked the natural sweetness of some I’ve had.

You can see what fellow coffee blogger, Bex, of Double Skinny Macchiato, made of Mia Coffee.