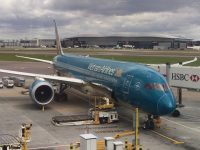 Welcome to another instalment of Brian’s Travel Spot, featuring Vietnam, a new destination for the Coffee Spot and for me personally. Having previously hardly set foot outside Western Europe and North America, the last 12 months have seen me visit China, Japan and now Vietnam for the first time. As it was with the two previous trips, this is for work, with time for some Coffee Spot duties tacked on at the start/end.

In another first for me, I flew out (and returned) on Vietnam Airlines. Having previously tried to travel only on British Airways or Virgin for long-haul flights, the last twelve months has seen me flying on a variety of airlines. Other than the annoyance at having my airmiles spread around all over the place, my (long haul) experience has been very positive, a trend that continued with Vietnam Airlines.

The trip itself took in a few days in Ho Chi Minh City, followed by a week there for business, and was rounded off by a week-long trip all the way up the coast by train to Hanoi, with stops at Hoi An and Hué along the way. I then flew back from Hanoi to Ho Chi Minh and, from there, home.

You can see what happened after the gallery.

I want start by spending a little time talking about my flight with Vietnam Airlines since I’m aware that the non-western carriers are sometimes looked down upon by the flying public. I’ve been guilty of that myself; 10 years ago, had I made this trip, I’d have probably tried to book through British Airways or Virgin and flown via Hong Kong. Indeed, had I not visited Hong Kong last year on my way to China, I might have been tempted to do that on this trip instead.

However, the lure of a direct flight, plus, on the way back, the chance to fly business class at a price that wasn’t going to blow that meeting’s travel budget in a single flight, saw me plump for Vietnam Airlines. I was also buoyed by a very favourable experience flying with Eastern China Airlines (Hong Kong to Shanghai) and Hainan (Shanghai to Chicago via Beijing).

Flying a fleet of very modern Boeing 787s, which is rapidly becoming one of my favourite aircraft, Vietnam Airlines runs three flights a week direct from London Heathrow to Ho Chi Minh City (departing London on Monday, Wednesday and Saturday). I particularly appreciate the provision of at seat power through the aircraft on 787s (although, in fairness, this now seems standard in most modern long-haul aircraft).

As modern as the aircraft is, the booking procedure reminded me of when I started flying long-haul 20 years ago. Booking, for example, was straightforward via the excellent Vietnam Airlines website, but what booking actually means is this. An e-mail is sent to an airline agent who then books the actual flight for you, the ticket arriving by e-mail a day later. It all works fine, but for someone used to booking on-line in real time, with interactive seat maps, it was a bit of shock.

The 20-years-ago feel extends all the way to check-in. For example, I had to request a specific seat by e-mail (see my previous comment about the lack of on-line seating maps) and was unable to secure an exit row or bulk-head seat, which were only assigned at the airport itself. Similarly, I can’t remember the last time I had to physically check-in at an airline desk and receive a boarding pass (there are plenty of times when I’ve checked in on-line, printed my own boarding pass, and then received one at bag drop).

All of this, though, was a minor inconvenience at worst, although it did rob me of an hour in bed as I turned up to check in a full three hours before my flight, which is something I never normally do. However, my early arrival paid off and although all the exit row seats had been taken, I was able to secure a bulk-head seat right at the front of the economy section.

The flight was, by the way, from Heathrow’s Terminal 4, the forgotten bit of Heathrow, especially since Terminal 5 opened. Tacked onto the south-eastern corner of the airport, my taxi driver had never even been there before, while the last time I’d graced its halls was at least 12 years ago. However, I really enjoyed my experience there: check-in was smooth, security a breeze and the gate had plenty of seats.

The next pleasant surprise was boarding, the smoothest I’ve ever experienced. I followed my usual strategy of waiting in at the gate until the final call was announced. Normally this results in a small queue to check in, but I just walked through this time and didn’t even have to queue to get on the plane, which is unheard of.

As I said, I managed to secure a bulkhead seat, As much as I like my exit row seats, I prefer the bulkhead seats. Although there’s less leg room, there’s more than enough and you have the advantage of a pocket on the bulkhead to keep things in, plus you don’t have to keep the floor clear since it’s not an emergency exit. When I’m in an exit row seat, I’m forever having to get up and put things away or get them out again when I need them. The other drawback is that most exit row seats are by the toilets and, since they have lots of space in front of them, my fellow passengers seem to think it’s fine just to stand right in front of me while they are waiting.

The only problem with bulkhead seats is that it’s where the airlines put people travelling with young children because they can attach travel cots to the bulkhead walls for babies to sleep in. Case in point was this flight. I was in the middle aisle at the end of the row, the other two seats being occupied by a young man and his two children, one a baby and one a toddler. I’d been warned when I was assigned the seat, but I’d decided to go for it. I’ll put up with (almost) anything to get my legroom!

I have to say that the young man was not best pleased when I turned up, although he was perfectly pleasant about it. However, we both noticed that in the next aisle over, just one seat was occupied (the one by the window). Since I was practically the last person on the plane, it seemed unlikely they were taken, so we quickly checked with one of the cabin crew and got permission to move over. I don’t know who was more relieved: me or the young man!

You can see how the actual flight went after the gallery.

After the little drama with the seats, which lasted all of five minutes, the flight was incredibly smooth. There was one slight hiccup when the power sockets under our seats didn’t work, but all that required was a quick word with one of the cabin crew who immediately disappeared towards business class. A minute later, the power was back on, just one example of the excellent service. The cabin crew were superb: friendly, helpful and unfailingly polite.

We were served two meals, lunch (about an hour after take-off) and breakfast (about two hours before landing). The food was good, rather than spectacular, and I even tried the coffee before deciding that green tea would be a much better option. Plus, of course, I had brought my trusty Travel Press and feldgrind along with me, so, with the help of a jug of water from the cabin crew, there was decent coffee to be had. Which brings me to one tiny complaint…

Which genius at Boeing decided to redesign the fold-down baby-changing tables in the toilets to make them baby-shaped? They used to be completely flat, the ideal surface for making coffee on. Now if I try, everything just falls over. So inconsiderate…

As usual, I worked on the flight (and wrote most of this Travel Spot too) so I can’t comment on the on-board entertainment or anything like that. I did appreciate the big screen on the bulkhead wall, though, which showed our progress as we made our way across Europe, over the Black Sea and then on over the Caspian Sea.

What made it even more interesting was that as part of my preparation for the trip, I’d been re-reading Cross Paths, Crossing Borders by my friend Simon Duffin (better known as Fancy A Cuppa?). This tells of the journey that Simon and his wife made (mostly) overland from Yorkshire to Australia, including a swing through Vietnam (hence my interest). As I looked at the screen, I saw country after country that Simon had gone through; it was really rather surreal. Our paths finally diverged after the Caspian Sea, as we headed south over Afghanistan and Pakistan. Then, having crossed border after border, we flew over India. For hours. And hours. It really is very big. After that, there was just one more stretch of sea to go, plus a bit more land and we were there.

My only real annoyance on the flight, and this isn’t something that’s particular to Vietnam Airlines, is the instance on making the cabin completely dark (which they can do at the flick of a switch these days in a 787 since it has electronically-controlled tinted windows rather than slide-down blinds) even when it’s light outside. It’s particularly egregious on daytime flights (which happened to me on my way back from Tokyo, this time flying with British Airways). I understand that some (probably a majority) of the passengers want to sleep, but trying to work on a laptop on a plane is hard enough without it being dark. Yes, there is the individual reading light, but again, on 787s, this seems to have one setting (blindingly bright) and I invariably end up with a headache/eye strain.

On this flight it didn’t get dark outside until we were over Pakistan/India, but the cabin had been plunged into darkness long before then. The irony was that while there was bright sunshine outside and complete darkness in the cabin, the bulkhead monitor was showing virtual-reality views from the passengers’ perspective so we could identify all the features and landmarks we would have been able to see if the windows hadn’t been blacked out… Oh well.

We took off on time (11.10 in the morning UK time) and, after almost 12 hours in the air, touched down 45 minutes ahead of schedule at Ho Chi Minh City, arriving at 5.02 in the morning on the following day. As we spilled down the steps and onto the tarmac in the pre-dawn light, I have to say that it was one of the best flights I’ve had in a while. So, if you’re heading to Vietnam, I can wholeheartedly recommend flying in economy with Vietnam Airlines.

In the meantime, you can see what I made of flying business class on the way home, while if you are interested in the trip as a whole, please visit my Travel Spot page on Vietnam.