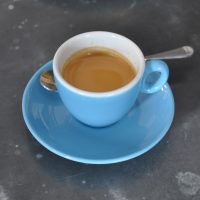 Four years on, and the new coffee shop, which goes by the name Ground Control, is not so new anymore, but I’ve finally managed to pay a belated visit. As the name suggests, the Ethiopian Coffee Company only roasts coffee from Ethiopia, the birthplace of coffee. There’s a monthly blend on espresso, a single-origin on pour-over, plus a wide selection of tea from Cardiff’s Waterloo Tea. If you’re hungry there are toasties and cake, all served in a delightful, compact spot with almost as many seats outside as in. It’s so lovely, in fact, that you’d be justified in asking what took me so long…

You can read more of my excuses after the gallery.

I’m rather ashamed at not having visited Ground Control before now, particularly since it’s a champion of Ethiopian coffee, which is the sort of thing I quite like. For example, I managed to make it to both branches of Café Integral (which are in New York and Chicago!), a coffee shop/roaster which only serves Nicaraguan coffee, while I’ve also been all the way to San Francisco and Sextant Coffee Roasters, another coffee shop/roaster with close ties to Ethiopia. Oh well, better late than never!

What makes it worse is that Ground Control is a really lovely place. What took me so long? Small, well­-formed and beautifully fitted out, it’s a fantastic showcase for the Ethiopian Coffee Company. Occupying the ground floor of a narrow, four-storey building in a quiet, leafy corner of Islington, Ground Control has a central, recessed door, flanked by large windows on either side.

There’s a small seating area on a raised step, separated from the pavement with long, black iron railings. This houses a pair of round two-person tables, one for each window. These are mirrored by two more down on the broad pavement in front of Ground Control. It’s a great spot to sit and watch the world go by, sheltered from sun and rain by a broad, retractable awning.

There’s not much more seating inside, where the counter, which is at the back on the left, takes up around half of the available space. There are bench-seats in the two windows, each with a table and a couple of chairs. At the back, there’s just enough space on the right of the counter for two more small, round tables, a one-seater next to the counter itself and a two-seater against the wall. It really doesn’t take many customers to fill the place up.

I loved the décor, with its dark grey tiled floor and dark wood panelling stretching halfway up the walls, whitewash above them. The metal-topped tables provide a contrast to the wooden furniture, wooden counter, wooden shelving at the back and the lovely wooden cabinet on the left-hand wall. The darkness of the wood is partly offset by plenty of natural light from the windows at the front.

There’s a small selection of food, with four toasted sandwiches to choose from (while I was there, one vegan, two vegetarian and one meat). There’s also a similarly small selection of cake, cookies and pastries, from which I chose the lemon and cherry polenta cake. This was excellent, with a rich, crumbly texture, and not too sweet.

Turning to coffee, Ground Control has a seasonal espresso blend which changes on a monthly basis. When I was there in May, it was a roughly equal mix (40/30/30) of coffees from the Birtukana, Hunkute and Bokasso regions. There was also a Sidamo on pour-over.

I went for an espresso, which was pulled long, providing a bright, acidic shot, but well-rounded and with no sharp edges. I know I shouldn’t be swayed by such things, but it was pulled on a gorgeous Kees van der Westen Mirage and served in a beautiful blue Inker cup, which I probably enjoyed almost as much as the coffee.

I’ll leave you with this nugget: the Ethiopian Coffee Company is opening a new café on the Kings Road over the summer…