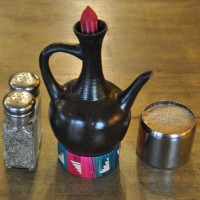 I must confess, the tag line “where coffee meets popcorn” didn’t initially inspire me. Really? Coffee and popcorn? However, Coffee & Fandisha came highly recommended, and, since I’d made the journey to Liverpool’s Baltic triangle (admittedly only a 15-minute walk from the centre), I thought I’d better go in…

So, what is Coffee & Fandisha? The clue’s in the name, “Fandisha” being Ethiopian for popcorn. It transpires that popcorn’s a traditional element in the Ethiopian coffee ceremony, consumed while waiting for the coffee to stop you getting hungry. Hence, Coffee & Fandisha, “where coffee meets popcorn”.

If you don’t fancy espresso, there’s a single-origin filter (V60/Chemex), the roaster rotating between Neighbourhood Coffee, Casa Espresso or Nude Espresso. There’s also loose-leaf tea, Kokoa Collection hot chocolate, wines and spirits, while if you’re hungry, you can choose from the breakfast, brunch and lunch menus, or feast on the decent cake selection.

Coffee & Fandisha, which opened in late 2014, occupies a small but outstandingly beautiful brick-built building, open to its A-frame roof high above you. Standing outside though, it looks fairly plain. There’s an inset entry-way in the centre, with the door on the right and two similar-sized glass panels to the centre/left. There are two small windows to the left and right, with two larger windows (with excellent views of Liverpool Cathedral) in the left-hand wall, making the interior pretty bright. It’s also very well-lit, a huge array of light-bulbs hanging down above the counter.

The counter, by the way, is a magnificent, brick-built affair, which blends in with the bare-brick walls and concrete floor. Occupying most of back wall, the cake and espresso-machine are on the left, while to the right, the kitchen hides behind a screen. The counter ends three-quarters of the way along the wall, leaving space on the right for a six-person table. The wall on this side, which has no windows, is a deep, warm yellow, lit by angle-poise lamps, which illuminate a series of photos. The wall behind the counter is painted white, as is the ceiling.

I was fascinated by the Ful Medames, a traditional Ethiopian dish of spiced beans with egg, tomatoes and feta, served with warm pita bread. It was on the brunch menu, but, since I’d arrived at 2 o’clock, it had all gone. However, I must have looked really disappointed because a special batch was made just for me! I received a large bowl of lightly spiced beans, mixed with sliced, boiled egg and tomatoes, topped with feta, a warm pita bread on the side. It was very tasty and extremely filling, the perfect late lunch.

By this time I was ready for coffee and tried the house-espresso, a mix of Ethiopian Konga and Yirgacheffe. An interesting blend, it wasn’t quite to my taste, but evolved with each sip, starting and ending well-balanced (sips one and four), while for sips two and three, the fruitiness really came through, particularly in sip three, when it really was quite punchy.

Naturally, I had to try to some popcorn, which is available on the side by the water. Just grab a bowl and help yourself. It comes in sweet and savoury varieties and I tried both. Unfortunately, I’ve never liked popcorn, finding it rather insubstantial. My American friends tell me this is because I’ve never had proper popcorn and on this basis, my quest continues since the Fandisha lived down to my preconceptions. However, no-one’s forcing you to have popcorn with your coffee and, as such, it’s a nice touch which in no way distracts from the otherwise excellent experience. Plus, if you actually like popcorn, you’ll probably love it.

To compensate, I had a slice of the cranberry drizzle cake, which was, in contrast, amazing: sweet, but not sickly, a glorious cake, with a rich, fruity topping.

December 2016: Coffee & Fandisha was a runner-up for the 2016 Coffee Spot Award for Best Lighting.