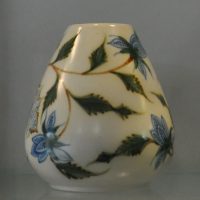 On my recent trips, I’ve had the very good fortune of having some outstanding coffee shops right next to my hotels, but in this case, good fortune had nothing to do with it. I’d deliberately picked my hotel, buried in the warren of narrow streets west of the lake in the heart of Hanoi’s Old Quarter (Hoàn Kiếm), because it was next to two of Bex (Double Skinny Macchiato) top two recommendations, RuNam Bistro and today’s Coffee Spot, Oriberry Coffee.

Oriberry is a Vietnamese social enterprise founded in 2010 to work closely with Vietnamese coffee and tea farmers, the ideals at the heart of the third-wave coffee movement. Oriberry is a chain of four coffee shops, which also double as retail outlets for its range of pottery, which is handmade in the nearby village of Bat Trang, and coffee, all of which is roasted in-house.

Oriberry serves two espresso blends, one, the 64 blend, a mix of Robusta and Arabica beans, the other, the 73 blend, pure Arabica. Both are available as espresso, while the 64 is also available as traditional Vietnamese Coffee, made with the cà phê phin cup-top filter. There’s also a range of Vietnamese tea and cakes.

Oriberry has four branches in Hanoi, two in the Old Quarter. To avoid confusion, this one is west of the lake, tucked away down the side of the cathedral (the other is the south of the lake). Long and thin, it has a square, glass front, with the obligatory plastic stools outside for those who want to squat on the busy, narrow pavement.

Inside, it’s long and thin, the counter immediately to the right as you enter, occupying the window. A storeroom behind counter extends maybe three-quarters of the way back, making the actual store space very narrow. There’s enough room for three two-person tables down the right, against the storeroom wall. However, at the back, things open out a little, where a large alcove on the right, behind the storeroom, has two more two-person tables.

The entire left-hand side of the store is given over to shelves stacked with Oriberry’s gorgeous handmade pottery, intermingled with retail bags of coffee/tea. There’s even more coffee in the alcove at the back, where three glass shelves line the right-hand wall.

Surprisingly, given the relative lack of space, Oriberry doesn’t feel small or cramped. This is helped by the large mirror occupying almost all the back wall. The décor is simple, with a tiled floor and whitewashed walls and ceiling. Fortunately, there’s air conditioning at front, plus a large fan at back, making it a cool, relaxing space, although it can get noisy when full. The only other drawback I found is that while the service from the friendly staff is extremely attentive, it can be slow. It took me about 10 minutes to get served while the staff were busy with customers buying beans/pottery. Not that this bothers me, but it’s worth noting if you’re in a hurry.

Oriberry works with farmers across all of Vietnam’s coffee-growing regions. These are listed on the front of every packet of coffee (a tick in the box next to the region(s) indicates where the beans were grown). It roasts all its own coffee, the roasts described as either D (Dark) or DM (Dark Medium) on the packets. Initially this worried me, but I think it’s a nod to the local market, which likes its coffee darkly-roasted. I bought a couple of bags marked DM and I’d describe the roast as medium, maybe lighter. Either way, it tastes fantastic.

Oriberry sells blends and single-origins, with the blends described by two numbers. The 64 house-blend is 60% Arabica, 40% Robusta, while the 73 house-blend is single-origin Arabica bean, 70% roasted dark, 30% roasted medium, There’s also an 82 blend of Arabica beans, 80% from Quảng Trị, 20% from Dien Bien. The single-origins I saw were mostly from Quảng Trị (a highland region on the north-central coast just north of Hué), but other regions are represented.

Working closely with Vietnamese farmers is something Oriberry has in common with all the speciality coffee shops I visited in Vietnam. However, Oriberry goes one further and has a range of beautifully-decorated, locally-produced pottery, including vases, plates, cups, teapots and, best of all, gorgeous pour-over filters in the style of Kalita and V60 drippers.

I had a double espresso, made with the 73 blend, quite a strong cup and a little acidic, but with a good all-round mouth taste. On the strength of that, I bought a bag to bring home with me, which I’ve been enjoying through my cafetiere each morning and my cà phê phin (cup-top filter) in the afternoon. i also bought a bag of a single-origin from the Quảng Trị region, which has been going well with my pour-over filter. I may have gone overboard and bought far too much pottery, including a pour-over filter or two (or three), mostly as gifts.

You can see what fellow coffee blogger, Bex, made of Oriberry during her visit in 2016.