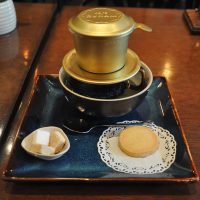 This time last year, I was approaching the end of my Vietnamese trip and, reaching my final stop, Hanoi, I found a small but vibrant coffee scene. My hotel had been carefully chosen, in the heart of the old city and around the corner from both Oriberry Coffee and today’s Coffee Spot, RuNam Bistro, although back then it went by the name Càfê RuNam. A national chain, I had somehow missed its four branches in Ho Chi Minh City, including the one on the same street as Shin Coffee. The Hanoi branch came highly recommended though, by no higher authority than both Fancy A Cuppa? and Bex of Double Skinny Macchiato.

RuNam Bistro is a high-end coffee-and-food spot, offering table service and high-quality food from breakfast through lunch to dinner, all accompanied by Vietnamese-grown coffee, roasted in-house, and served in the most elegant surroundings of any coffee shop I visited on my trip. The coffee is available as either espresso or traditional Vietnamese cup-top filter (cà phê phin). There’s a dark-roasted house blend of Arabica and Robusta beans, plus some 100% Arabica beans, including decaf (a rarity in Vietnam), but you have to know to ask, otherwise you will get the house blend.

Halfway down the busy Nhà Thờ, a street running from the cathedral directly towards the lake, you’ll find RuNam Bistro on the right-hand side. A modest exterior, all glass on the ground floor, with a balcony above, RuNam offers outdoor seating, with two tables on either side of the central glass door. That said, a better alternative is the balcony, where you’re more insulated from the noise and bustle of the street.

Inside RuNam is elegance personified. The seating is divided into multiple spaces, starting with the downstairs, dominated by the counter on left, which is set back from the window. There’s space for a two-person table between window and counter, while on the right, there’s another two-person table in the window, followed by two pairs of two-person tables with sofa-benches against the walls, chairs on the opposite side, backs to the counter.

A large pillar by the till at the end of the counter effectively marks the end of this space, which is followed by a flight of stairs to the upstairs. Beyond this is a light-well which acts as a back room, where a large, communal table is surrounded by bookshelves and display cases.

Upstairs is just as gorgeous, with the seating split into four areas, starting with a narrow landing with a couple of tables. At the back, stairs lead up on the left to a private room while below that, there’s a large room with a scattering of two- and four-person tables. There’s more seating at the front, on the same level as the landing. Three five-person tables with chairs are against the left-hand wall, while on the right, a long, padded bench hosts eight two-person tables, chairs on the other side, arranged in four sets of pairs. The front is almost all glass, with an iron frame and central door opening onto the balcony with its decorative iron railings. This projects over the pavement, holding three round, red two-person tables.

Both upstairs and down have high ceilings, plus air-conditioning, supplemented by ceiling fans upstairs, which has a more relaxed atmosphere away from the bustle of the counter. The natural light from the windows at the front, plus the light-well, is supplemented by multiple, beautiful light-fittings.

There’s an extensive menu with breakfast, lunch and dinner options, plus a wide range of cakes and ice cream. There’s also a comprehensive range of tea, all backed up with high-quality service, such a glass of water, which is topped up throughout your stay.

I visited twice, both for lunch. On the first day, I ordered stir-fry noodles with mushrooms and tofu, one of the best meals I had in Vietnam. Ordering my coffee at the same time, the waiter asked if I wanted them together, or the coffee after meal. It’s little things like this that matter.

Since RuNam had decaf on the menu, I tried it as a traditional Vietnamese cup-top filter. It was good, but felt a little thin, closer to a standard filter coffee, although it still had plenty of flavour. I was sufficiently impressed that I bought a bag of the beans to take home with me.

On my return, I had some awesome pancakes, followed by another cà phê phin, this time with a blend of Vietnamese-grown Arabica beans. In an interesting twist, the cup, filter on top, comes immersed in a bowl of hot water, the ultimate in pre-warming the cup. The coffee itself was excellent, beautifully balanced, but not quite as rich or sweet as I’ve had previously. It was also less thick on the tongue, but still quite syrupy. Definitely not a filter as I understand it (far too short to start with), it’s also not espresso. Something in between, it’s its own thing, and really nice.

You can see what fellow coffee blogger, Bex, made of RuNam during her visit in 2016.