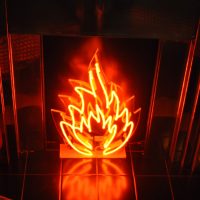 200 Degrees is well-located on the pedestrianised Market Street. It’s reminiscent of the Birmingham 200 Degrees on Colmore Row, although while that occupies two adjoined units, Market Street is single shop front, glorious picture windows curving in towards a central, recessed door. There’s plenty of outside seating, with four two-person tables facing each window.

Like St Martin’s, 200 Degrees is big, showing that there’s an appetite for good coffee in Leicester despite the small number of good shops. Initially, the interior is also similar to Colmore Row: long counter down the right-hand side, seating on the left and centre. However, there’s a big difference at the back: while Colmore Row is dark and moody, far from the windows at the front, Market Street opens out, the low ceiling suddenly giving way to a skylight, soaring two floors above, flooding the back with light and giving it a wonderful sense of space. However, those missing low ceilings and moody lighting need not fear, since Market Street has those too, with two cosy rooms right at the back.

There’s a table in the window on the left, plus another just by the door, while two high, two-person tables line the exposed-brick wall. A 14-person communal table with low stools breaks things up, then there’s another two-person table, and all of this before you’re one-third of the way in. Market Street narrows slightly, with two more two-person tables on the left and a row of three, four-person tables down the centre, level with the end of the counter. That’s when it gets interesting.

Market Street opens out beyond this point, soaring up to the skylight, from which two massive lights are suspended. This is effectively a mezzanine level with stairs ascending the left-hand wall and a balcony/landing running around the back and right-hand walls. Sadly it’s currently staff-only, with a kitchen and store room at the back, while at the front, a smaller flight of stairs leads to another room at the front. Not in use at the moment, this may become anything: more seating, a training room or offices/meeting rooms.

There are three openings in the back wall, a wide, central one, flanked by two narrower ones. On the right are the toilets, while the central and left-hand ones form cosy rooms, connected at the back. The central one has two four-person tables on the left, the first with comfy chairs, a two-person table on the right, and, right at the back, two armchairs, backs to the entire café, flanking the trademark 200 Degrees neon fireplace.

Meanwhile, the left-hand room is lined with wood panelling and is sure to be a cosy option come winter. It also has two four-person tables on the left, with another two-person table on the right, but this time with comfy chairs.

The previous day I’d been to Nottingham and tried the Brazilian single-origin guest espresso at Carrington Street, where it went really well in a flat white, so here I tried it as an espresso, finding it rich and full-bodied, with a well-rounded flavour. I matched that with an aubergine, pesto and cheese sandwich, which was served warm. This was excellent, with plenty of aubergine and pesto, not something I would have jumped at as a taste combination, but which works really well.

You can see what fellow blogger Bex of Double Skinny Macchiato, made of 200 Degrees.