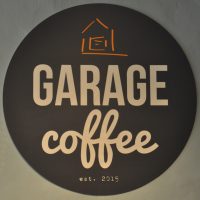 Just off Canterbury High Street, down a very unpromising lane (at least by the route I took, although there are far prettier approaches) is the latest addition to Canterbury’s speciality coffee scene, and a very welcome addition indeed, given the recent closure of nearby stalwart, Water Lane. There you will find, installed in the ground floor of the Fruitworks Coworking space, Garage Coffee.

Garage has been roasting coffee since 2015, disappointingly in a shipping container in nearby Hoath, rather than a garage, but Shipping Container Coffee didn’t have the same ring. Having built itself a dedicated local following, it moved into Fruitworks (at Fruitworks invitation) in April 2017. Occupying a large, open space of a size that most coffee shops can only dream of, Garage serves its house-blend and a single-origin on espresso, with another single-origin on pour-over through Aeropress, V60 or Chemex. Decaf is available on both espresso and pour-over.

There’s also tea from local suppliers, Debonair Tea Company, from nearby Hythe, plus a selection of very tempting cake. Unsurprisingly, all the coffee is for sale, along with coffee-making kit and a selection of tea, while you can also buy the beautiful cups that Garage serves its coffee in.

January 2019: Garage Coffee has opened a second location in Whitstable.

November 2019: Garage Coffee has left Fruitworks and taken over Canteen on Sun Street, a short walk away in the direction of the cathedral, which I visited at the end of the month.

Garage Coffee occupies the right-hand side of the ground floor of the Fruitworks Coworking space at the corner of Jewry and White Horse Lanes, the latter providing an easy, but rather unflattering, link to the High Street. The building’s a beautiful Victoria warehouse, a two-storey, brick-built affair, which Fruitworks has occupied since late 2015.

Approaching along White Horse Lane, Fruitworks/Garage is directly ahead of you, while if you come down Stour Street (a much prettier route), turn into the short Jewry Lane, where Fruitworks is on the right. Either way, entry is via what looks like an old loading dock in the building’s left-hand side. This provides what is now, in effect, a large, sheltered porch, housing a two-seater table at the back, sheltered from the elements, plus the door to Garage on the right.

This leads into an entrance corridor running along the front of the building, with another two-person table on the back wall to the left, plus a four-person window-bar to the right. However, the real surprise comes when you reach the end and step into Garage’s main space, which opens out ahead and to your left, running from the front of the building to the back. Split into two equally spacious parts, you’ll find the counter and limited seating at the front (plus stairs up the main coworking space on the first floor), and more seating at the back, which is open to the A-framed roof high above. There’s plenty of natural light at the front, via windows in the front wall (to your right as you enter), but the back, which is accessed via three arches in the party wall, has no windows, relying on borrowed light from the front and a generous array of light-fittings and spotlights.

The counter is to your left, occupying the space along the left-hand wall between one of the arches at the back and the corridor at the front. It’s a huge space, resulting in a very open, uncluttered counter. There’s not much seating in the front, just a sofa immediately to your right, tucked under the stairs by a window, and a pair of two-person tables. One is against the right-hand wall, next to the retail shelves, while the second is against the party wall at the back, between the middle and right-hand arches.

There’s more seating at the back, which extends off to the left, behind the counter, and also to the right. The space is dominated by two massive 10-person communal/working tables with generous power-strips in the centre, complete with USB charging points. There’s also a big sofa tucked away in right-hand corner opposite two arm chairs across a large, wooden coffee table.

I started off with the single-origin espresso, an Indonesia Wahana longberry, which my barista, Chase, who I’d previously met 18 months before at G!RO Cycles (and who has now gone on to open his own coffee shop, Coffee Curiosity), recommended as a flat while. The coffee had the rich, dark taste I’d expect from an Indonesian and it went really well with the milk. I paired this with a slice of the coffee cake, made with Garage’s own coffee, a Honduras single-origin. Finally, I tried, at Chase’s suggestion, house-blend, Maypole, as an espresso. This is a mix of Mexican and Colombian beans and was a rich, smooth and well-balanced shot with lots of body, the perfect send-off.

4 thoughts on “Garage Coffee at Fruitworks”