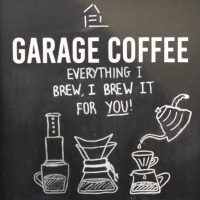 Garage Coffee first came to Whitstable with its 2018 pop-up, making things permanent when it took over its current location from Burgate Coffee House in January of the following year. This made it Garage Coffee’s second permanent location, following on from its coffee shop inside the Fruitworks co-working space in Canterbury. However, in October, Garage left Fruitworks and, staying in Canterbury, moved to the Canteen on nearby Sun Street. Technically, of course, this leaves the Whitstable outpost as Garage Coffee’s oldest coffee shop…

Compared to either of the Canterbury locations, the Whitstable café is a fairly modest affair, but it’s still a substantial operation, with a generous seating area at the front and a counter with minimal seating at the back. The coffee offering is the same, with everything roasted in-house. The Maypole blend is on espresso, joined by decaf and a single-origin, which changes every few days. There’s a daily single-origin on batch-brew while all Garage’s single-origins are available on pour-over through the V60, Aeropress or Chemex.

Although the food offering’s not as substantial as Canterbury, it’s still pretty impressive, with a toast-based all-day breakfast menu plus sourdough toasties and wraps, all prepared in the kitchen at the back.

Garage Coffee occupies a narrow storefront on the right-hand side of the main street leading north into Whitstable from the A299. Alternatively, it’s a 10-minute walk heading west from the railway station. Although the route from the A299 is effectively one continuous road, like many British streets, it goes by multiple names, with Garage Coffee near the northern end of the Oxford Street section, about a 100m south of Blueprint Coffee & Books on the other side of the road.

The storefront has the feel of an old-fashioned shop, on the ground floor of two-storey row of similar shops, with flats on the floor above. A deeply-recessed central door nestles between two correspondingly deep bay windows, the right-hand one holding a two-person table in the window itself, while there’s a two-person sofa, back against the wall, in the left-hand window. Outside, a small, round two-person table stands in front of each window.

Garage Coffee is long and thin. The front room, with the bulk of the seating, has plenty of light from the front, which is effectively all glass. The smaller room at the back has the counter, two tables and a bar, with borrowed light from the front and a small window in the right-hand wall. The décor is simple, but welcoming, wooden flooring and chipboard counter offsetting the whitewashed walls and ceilings. The walls, meanwhile, are hung with photos of coffee farms and with various artworks.

The seating in the front room is arranged around the edges. After the window table on the right, a long, padded L-shaped bench runs along the wall, with three round, two-person tables down the right-hand side, and two more against the back wall. Opposite these, after the sofa in the window, are two three-person tables against the left-hand wall, followed by a set of retail shelves.

An opening on the left-hand side of the back wall, just past the retail shelves, leads to the back room, the counter occupying the rear part, menus hanging on the left-hand wall. You’ll find a concise espresso menu and the choice of beans here (the pour-over option is only a suggestion). There’s a two-person round table against the wall to the left of the opening, with another to the right, by an open but disused fireplace. Finally, against the right-hand wall, you’ll find a narrow two-person bar with high stools, but this is very much seating of last resort.

There are two doors in the back wall, one to either side of the counter. The one on the left leads to the kitchen, while the right-hand one provides access to the outside toilet, but please do read the instructions!

I arrived for a late lunch and while the food options weren’t as extensive as those at the Canteen in Canterbury, there was plenty of choice, with multiple vegetarian options. I was drawn to the various avocado on toast options, but instead went for the goats’ cheese, balsamic vinegar and tomato toastie.

I paired this with a pour-over of the Finca Santa Isabel from Guatemala, prepared through the V60, and served in a carafe with a glass on the side. A full-bodied coffee, it was very drinkable, although I can’t say I got the tasting notes of toffee, peach and white grape that were on the menu!