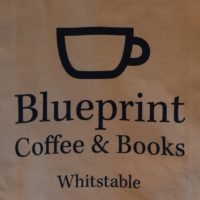 Blueprint Coffee & Books, in Whitstable, is at the northern end of Oxford Street, a stone’s throw from Oxford Street’s other speciality coffee shop, Garage Coffee. When it comes to bragging rights, however, Blueprint wins hands down, having started in 2013, with the shop opening in 2016. Not that I can claim anything in the way of moral superiority, having only heard of it a couple of years ago when Luke, who I knew from Water Lane Coffee in Canterbury, took over as manager. The loss, naturally, is all mine.

Blueprint Coffee & Books does exactly what the name suggests. Spread across two rooms, it’s a small bookshop with a select range of titles, while the coffee all comes from London’s Alchemy. There’s a concise espresso-based menu, the coffee served in three sizes: 4, 6 and 8oz, either with or without milk. You can choose from the house coffee, a guest or decaf, while for filter coffee, the options are V60 or Aeropress, each with its own single-origin, Blueprint also offering a Chemex for two.

If coffee’s not your thing, then there’s Blendsmiths hot chocolate, Jing Tea and soft drinks, while if you’re hungry, Blueprint has a small selection of cakes.

Blueprint Coffee & Books is at the northern end of Oxford Street, on the left-hand side heading into Whitstable. About a 10-minute walk from the seafront, it’s a similar distance from the station, where you’ll find Blueprint’s coffee van. Open until 10am on weekday mornings, this is where it all started in 2013, Blueprint taking on the business from the previous owners.

Back on Oxford Street, Blueprint, which opened in October 2016, is on the ground floor of a lovely, three-storey building on the corner with Middle Wall. It looks to me like it was originally a house and, judging by the date on the down pipe next to the sign, it’s at least 200 years old.

Blueprint occupies the two ground floor rooms, both facing onto Oxford Street, each with its own large, projecting window, with a bench under the one on the right. The door is between the windows, leading into the room on the left, next to the dividing wall. The layout here is simple, with the counter, a lovely, tiled affair, at the back, running the full width of the room. There’s a three-person window-bar to the left, while the left-hand wall is given over to bookshelves, which also house a small selection of stationery and coffee-making equipment.

There’s more (but not much more) seating in the second room to the right, accessed through a large opening towards the back of the party wall. There’s another three-person window-bar at the front, a four-person table in the middle of the room, and a low, four-person coffee table with a bench and two stools against the back wall. There are more bookshelves here, starting on the dividing wall, while the right-hand wall has an exposed brick fireplace, with a final set of bookshelves between it and the window. Despite the relative lack of shelf space, Blueprint stocks an eclectic range of books, which are mostly non-fiction. Unsurprisingly, there are quite a few coffee-related titles on display.

The décor, like the layout, is simple, with whitewashed walls and ceilings, plus bare, wooden floorboards. A nice touch is the vintage stove in the fireplace in the second room, although I don’t believe it’s in use.

The counter, in keeping with the simple layout, has the La Marzocco Linea espresso machine on the left, along with a Victoria Arduino Mythos 1 grinder for the house espresso and a Mazzer Robur for the guest espresso. There’s also a ubiquitous Mahlkönig EK43 on a work surface at the back for the decaf and filter coffee. The menu, meanwhile, is on the back wall, to the right of the EK43, with the choice of beans written up on a large paper roll on the wall to the right. In front of this, in a large, glass display case, are the cakes, from which I selected a lovely raspberry and almond friand, the moist cake packed with raspberries and almonds.

During my visit, Alchemy’s standard Opus blend was on espresso, although I was drawn to the guest, the Blanca Rosa Melgar, a macerated natural IH-90 varietal from Honduras (don’t worry, I had to Google it too). I had this as a straight espresso, served in a glass, with a glass of water on the side. It was, without exaggeration, one of the fruitiest espressos I’ve smelled in the cup, although it was more subdued on first sip, presenting a subtle, complex flavour. There was more acidity on the second sip, with a further, rich complexity on the final two sips. Simply outstanding.

December 2019: Blueprint Coffee & Books has won the 2019 Best Espresso Award and was a runner-up for the 2019 Brian’s Coffee Spot Special Award.