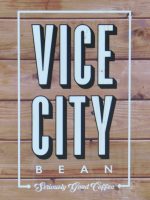 The casual visitor could be forgiven for thinking that Panther Coffee is all there is when it comes to speciality coffee in Miami. However, the  coffee scene is slowly taking off, particularly over the last couple of years. It was a barista at Panther’s Wynwood branch who first put me onto one of these newcomers, Vice City Bean, which opened in April 2016, a few blocks south of Wynwood, just north of the downtown area.

It’s a lovely spot, with large, north-facing windows, high ceilings and lots of space. The coffee is all the way from Madcap in Grand Rapids, Michigan, while there’s a guest espresso, which was from Onyx Coffee Lab in Arkansas while I was there. These are available through a cut-down espresso menu with a range of alternative milks. If you prefer filter, there are two options on bulk-brew and three more on pour-over through the Kalita Wave, with offerings from Madcap and the guest roaster. Meanwhile, there’s cold brew and loose-leaf tea.

If you’re feeling hungry, there’s a range of cake and pastries, including savoury pastries. Add to that a small selection of empanadas and assorted toast-based snacks, so you are covered for breakfast and lunch.

Although the address for Vice Bean City is North Miami Avenue, one of Miami’s main north-south arteries (and the one which separates the east side from the west side), you’ll actually find the coffee shop around the corner on North East 17st Street. Although it’s just a 15-minute walk from the art district of Wynwoood, it’s a very different part of the city, much quieter and more residential. Similarly, it’s a very different space with a very different atmosphere vibe when compared to Panther Coffee.

Vice City Bean has a simple layout, effectively a long rectangle running along street, but cut-off at 45⁰ on the front-left corner where it meets Miami Court. There’s a pair of benches out here should you want to sit outside. Alternatively, there’s a pair of glass double doors on the right, followed by windows all along front and down the 45⁰ side. These run almost floor-to-ceiling, making it a very bright spot, although a shady one, avoiding direct sunlight.

The seating is at the front and down middle, with counter at the back. Although there’s a small bench against underneath the awesome mural on the right-hand wall, I’m not sure it’s a viable seating option. However, the pair of three-person window-bars to the left of the door definitely are. Next comes the takeaway station, opposite end of counter, then there’s a two-person cocktail table with high stools and a four-person scaffolding sofa with its back to the windows in the 45⁰ degree section. A row of four small, square tables runs between the windows and counter. The middle two are two-person, with a three-person table at either end.

There’s more seat at the end of the counter, which runs along the back wall, parallel with the windows at the front. The food/cake is first, followed by the till, with the menu on the wall behind. Next are two Mythos 1 grinders and a two-group La Marzocco GB5, with the espresso choices in bags on the top of the grinder. This being America, it’s counter-service only, with an open area to the left to collect your coffee

Finally, there’s a small raised bar with four bar-stools which wraps around the left-hand end of the counter. You’ll find a pair of bulk-brew flasks are here, then, behind them at 90 degrees to the main counter, is the pour-over/tea bar. Beyond the counter are a set of retail shelves on the back wall, where you’ll find retail bags of coffee, including some from Grand Circle Coffee, a Miami-based roaster in Little Haiti.

The house-roaster is Madcap, a roaster I’m familiar with. Instead I was drawn to the guest, Arkansas’ Onyx Coffee Lab. Vice City Bean used to have San Francisco’s Four Barrel Coffee on the second grinder, but following Four Barrel’s recent troubles, it has switched to a guest roaster, with Onyx’s Geometry blend joining Madcap’s Third Coast blend on the main grinder. This will change every few months, while the filter options, which are served in a glass carafe with a small mug on the side, are changed weekly.

I had the Geometry blend as an espresso, served in a black, handleless cup with a glass of sparkling water on the side. A well-pulled shot, I found it bright, and a little sharp, but not into pulling funny faces territory. Before I left, I was starting to feel hungry, so I tried one of the guava and cheese pastelito, a staple of South American bakeries. Guava is a fruit which tasted to me like a sweet pickle, which went really well with the lovely pastry.