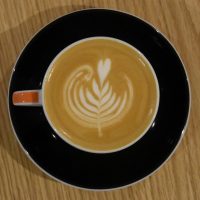 It’s been just over three years since I visited Foundry Coffee Roasters, who can claim to be Sheffield’s first speciality coffee roasters. Even then, chatting with Lee and Callum, the two driving forces behind Foundry, it was obvious that a café was on the roadmap, although it would be almost another two years before that particular dream became a reality and Foundry Coffee opened its doors on Bank Street in January 2017. Of course, it was then another year before I eventually dragged myself back to the city, paying Foundry a flying visit yesterday lunchtime.

As you would expect, the café is a showcase for Foundry’s coffee, although rather than bamboozle the customers with choice, there are just two options, called Comfort and Adventure, the former a more “conventional” coffee (a washed Guatemalan during my visit) and the latter a bit more far out (a washed Ethiopian). These are available as espresso or pour-over through the V60, with the particular beans changing every month or so, drawn from Foundry’s wider selection of single-origin beans. This is backed up by Kokoa Collection hot chocolate and tea from Birdhouse Tea Company. There’s also breakfast, lunch and a range of cake and sandwiches.

November 2019: Foundry has moved to the Cutlery Works, a food hall on the banks of the River Don, combining its coffee shop and roastery operations. As a result, it’s left Wharncliffe House, the coffee shop there being taken over by Cassinelli’s.

Foundry Coffee occupies the magnificent Wharncliffe House, a striking five-storey building on the corner of Bank Street/Scargill Croft. In the heart of the city centre, it’s just north of the Cathedral Quarter, in a distinctly business-orientated part of town (the clue is in the name “Bank Street”). Wharncliffe House was built in 1885 as the Earl of Wharncliffe’s town house and has been put to many uses over the next 130 years. Recently it was returned to residential use, but the ground floor was always earmarked for commercial purposes, Foundry securing the lease.

The entrance to the flat is down the steeply-sloping Scargill Croft, allowing Foundry to use the massive, arched main entrance to the house on Bank Street. This leads down a short hallway, through a pair of double doors, and down a longer hallway, depositing you towards the back of Foundry, which is effectively split in two by the hall. Off to the left, where you need to go to order, you’ll find the first of two rooms. This contains the counter, an L-shaped affair, which runs along the back wall and then down the left-hand side, past a row of windows overlooking Scargill Croft. This is mirrored by the seating, which also forms an L, a line of three two-person tables running along the right-hand wall and a three-person window-bar running along the front. Finally, if you like watching your coffee being made, there are a pair of stools at the (front) end of the counter, where you get a bird’s-eye view of the pour-over and, beyond that, the three-group Londinium lever espresso machine.

Alternatively, turn right at the end of the hallway and you’ll find yourself in a similar-sized room, dedicated entirely to seating. There’s a selection of four two-person tables (with chairs) and two four-person tables (with benches) plus, right at the front, another three-person window-bar. It’s not quite so bright in here, because the only windows are at the front, but it shares the same high ceilings and wonderful sense of space.

However, that’s not all. At the back, on the right-hand side, a set of wooden stairs leads downwards, doubling back on itself. This leads to a basement-like lower-ground floor, which contains the kitchen, where all the food is prepared, and additional seating. A large, open space, it’s also ideal for meetings, etc. While I was there, there was just a single seating area, effectively under the right-hand room upstairs, which had a four-person and a two-person table joined together to form one large, communal table. The left-hand side, directly under the counter, had been left open, which meant (to me at least) that it felt much more like a gallery.

Foundry does breakfast from 8 o’clock until 2 o’clock, with lunch joining in at 11.30. Sadly I’d already eaten, otherwise I’d have been tempted, particularly by the lunch menu, with its variety of interesting Indian-based items. Both menus are fairly short, and feature a strong set of vegetarian choices.

I did, however, have time for coffee, starting with a flat white using the Comfort beans, a washed caturra from Las Terrazaz in Guatemala. This was a lovely coffee, its rich caramel flavour perfectly complimenting the milk, from local dairy, Our Cow Molly. I followed that up with the Adventure beans, another washed coffee, this time an heirloom from the Biftu Gudina region of Ethiopia, which Callum recommended as a pour-over. This was perhaps less adventurous than I was expecting, the washing process producing a more balanced, subtle coffee that went down very nicely and provided an excellent contrast to the flat white.