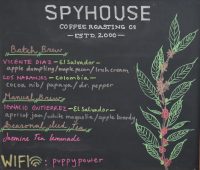 Spyhouse Coffee is on Snelling Avenue, a wide, north-south artery. On the corner with Palace Avenue, it faces south and west, catching the sun, particularly later in the day. Spyhouse occupies the right-hand side of the ground floor of an old, two-storey brick building, with another shop on the left and apartments above. There’s a large garden to the rear, with its own entrance from Palace Avenue, while there’s also a takeaway window down here, so you don’t even have to go inside if you’re just getting coffee to go. As with Five Watt, I am indebted to my friend Jen, who served as my local guide, for introducing me to Spyhouse.

Spyhouse has a cut-out door on the corner, the door itself at 45°, set back behind a narrow, cast-iron pillar, flanked by tall, narrow windows on either side. There are two wider, square windows to the left, facing Snelling Avenue, and a further window down the right-hand side on Palace Avenue, the windows stretching up to the tall ceiling.

The bright, spacious interior, with its gorgeous tinned ceiling, is flooded by sunlight. There’s a pair of window-bars, one either side of the door, with a longer, four-person one to the left, and a shorter, three-person one to the right. This is followed by the counter, a long, wooden affair with a marble top, which runs down the right-hand wall. The till and cakes are at the front, facing the door, with the coffee down the side, pride of place going to a customised two-group La Marzocco Strada espresso machine. There’s also a small pour-over area for the Kalita Wave, with the batch brewers and a hot boiler on the wall behind the counter.

Continuing on from the window-bars, the seating is arranged around the edges, with six long, thin, two-person tables running along a wooden bench against the left-hand wall. These are followed by a tall, eight-person communal table projecting from a pillar on the left-hand wall, while beyond a door in the far, left-hand corner, which leads to the outside seating area, another eight of the two-person tables run along the back wall.

The outdoor seating area occupies a triangular section of decking at the back of the building, where the garden would have been. There are four, four-person tables with benches running along a high-backed wooden bench-seat down the right-hand side, the tall back screening the seating area from Palace Avenue. This is joined by a central island, which can be used as a box seat, along with a long box seat along the left-hand side.

Back inside, you order at the front of the counter, collecting your coffee down the side. On my first visit, I had a flat white, the house-blend proving to be a lovely, biscuity coffee that went really well with the milk. I returned the following morning, having granola for breakfast, which was delightfully presented, the granola in bowl, a jug of milk on the side, all served on a narrow, wooden tray.

I paired this the Vincente Diaz, a single-origin El Salvador, one of two batch-brew options (the other was a Los Naranjos from Colombia, while another El Salvador was on pour-over). This was a really rich, full-bodied coffee, with fruity notes, and more than held its own as it cooled.