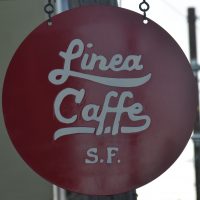 I’m indebted to my friend Karen for introducing me to Linea Caffe, which we paid a flying visit to on my previous visit to San Francisco in April 2019. Sadly I didn’t have time to do a write up, so on my equally brief return to San Francisco last week, I made a point of calling in for a more extended visit.

Located in the heart of The Mission, there’s not a lot to Linea Caffe, just a small, near cube-shaped, sunny, corner spot with windows on two sides and a massive L-shaped counter inside, which leaves space for a single, two-person wooden bench and not much else. Indeed, there’s far more seating outside, where a similar bench is joined by six small, round tables down the side of Linea Caffe.

Linea Caffe, which roasts all its own coffee, has a concise espresso-based menu using a seasonal blend plus decaf, backed up with a single-origin on batch brew. If you’re hungry, there’s a small range of cakes and pastries, including savoury options, from Neighbor Bakehouse.

You can read more of my thoughts after the gallery (all pictures from 2020 unless otherwise specified).

Andrew Barnett opened Linea in 2013, and it’s occupied the same spot on the corner of 18th and San Carlos in The Mission ever since. It’s a sunny spot, with large windows on two sides and a single door at the right-hand end, facing onto 18th Street. There’s a solitary two-person bench here, to the left of the door, under the first of two windows. However, there’s more outside seating around the corner on San Carlos Street, where six one/two-person round tables stretch out along the pavement beyond the back of the store, alternating in colour between red and green. This is where Karen and I sat on my first visit in April 2020.

Inside, there’s a single wooden bench under the window to the left of the door, separated from its twin outside by the front wall. The remaining space is occupied by the L-shaped counter, although in reality it’s two counters. There’s a stainless-steel catering counter to the left, behind which is an open kitchen, while the heart of the operation is a wooden counter, running the full width of Linea along the back wall, holding the cakes, till, retail bags and espresso machine.

The right-hand wall, meanwhile, is unoccupied, save for two large, sash windows, the first occupying the space between door and counter, while the second is behind/to the right of the counter. The first window, which was permanently open during my visit last week, can be used as a stand-up window-bar (at least, that’s what I did). The lack of any other seating does mean that the interior, with its high ceilings, is remarkably uncluttered.

When Karen and I visited, I had a cortado, served in a glass and made with the seasonal espresso blend. By the time of my return, Linea Caffe had invested in a brand new La Marzocco KB90, which I put into action with an espresso, again using the seasonal blend, pulled commendably short and served in a cylindrical pottery cup.

The coffee went well in milk, producing a smooth drink with classic chocolate notes, while on its own, it was nicely balanced, a smooth, surprisingly dark coffee. I paired it with a buckwheat financier, which was also very impressive, a rich cake, with plenty of body.

July 2022: you can see what I made of Linea Coffee Roasting + Caffe, Linea’s new (to me), roastery and coffee shop in Potrero Hill, which I visited on my return to San Francisco.