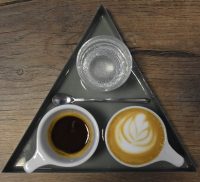 A permanent fixture of my now annual trips to Phoenix is meeting up with Meg and her husband Coffee Ken, Arizona’s leading coffee blogger. So, when I arrived in Phoenix on Saturday, other than picking up my hire car and checking into my hotel, my first act was to drive over to Gilbert, one the cities to the southeast of Phoenix, for our meet up. The venue was a new coffee shop, Mythical Coffee, on Gilbert Town Square.

What Ken hadn’t told me when he suggested Mythical Coffee as our venue, is just how new it is. Today it has been open for precisely two weeks. Mythical Coffee is a roaster and coffee shop, offering an ever-changing cast of single-origins, one each on espresso, batch brew and pour-over, with the coffee available to buy in retail bags. There’s also cold brew and, when the equipment has been tweaked, nitro cold brew will be available, along with several seasonal lattes and a small selection of matcha, chai and tea. Mythical offers a small brunch menu, featuring overnight oats, plus four different toast options, served until 2pm each day, along with a selection of cakes and pastries, available all day.

Mythical Coffee is in Gilbert, one of the cluster of cities southeast of Phoenix, part of the greater metropolitan area, including Tempe, Mesa and Chandler. Located in Gilbert Town Square, to the south of the centre, it’s in a parade of shops on the left-hand side as you drive in. There’s limited on-street parking out front, but if you turn left at the roundabout you’ll find a large car park at the rear of the parade. Even better, Mythical Coffee has a small, discreet back door, leading directly in from the car park.

In contrast, the front of Mythical Coffee is wall-to-wall, floor-to-ceiling glass, with central, inset, glass double doors. Two small, round two-person tables sit on the pavement outside, one on either side of the door. Inside, Mythical Coffee goes a long way back, seating down either side. There’s a sofa on the left-hand side, back to the wall, followed by a large chiller cabinet for soft drinks. Next come four two-person rectangular tables with a pair of benches against the wall, while on the other side, each table has a solitary chair.

On the right, meanwhile, is a narrow bookshelf by the window, full of coffee-related books, including my own, The Philosophy of Coffee, which came as a pleasant surprise. This is followed by another four two-person tables, identical in layout to those on the left. The counter comes next, occupying the right-hand side, starting about halfway back, an enclosed kitchen behind that.

The counter’s narrow side faces forward, which is where you order, with the menu and retail shelves on the wall to your right, while the till, printed menus and the cakes are on the counter in front of you. The long side of the counter holds the coffee-making equipment, with Mythical Coffee being impressively kitted out. First is the state-of-the-art Synesso Hydra MVP espresso machine and its Victoria Arduino Mythos II grinder, followed by a pair of Marco Beverage Systems SP9s which Mythical Coffee uses, along with the Kalita Wave filters, to make pour-overs.

At the very end of the counter is a three-person bar section, while the remaining seating is opposite the counter along the left-hand wall, starting with two four-person tables. In a narrow corridor, which runs down past the kitchen to the door at the back, there are three two-person tables arranged head-to-tail.

Mythical Coffee is the brainchild of Eric and Kat, along with the chef, Courtney. Eric, who I had previously met at Peixoto, in nearby Chandler (he recognized me), roasts all the coffee, sharing time on a Probat owned by Xanadu Coffee Company in Phoenix. Meanwhile, Kat does the branding and social media. We also met Adam, a local barista well known to Ken, who is responsible for the cold brew.

The coffee changes on a regular basis, with ten different beans/roasts having been used in the shop’s first two weeks! When we were there, there was a natural Ethiopian on espresso, a natural Honduran on pour-over and a washed Kenyan on batch brew.

At Adam’s suggestion, Ken and I both had a one-and-one, Adam providing us with samples of the batch brew, while Meg had a spicy chai. The batch brew was a typical, fruity Kenyan, which Ken really enjoyed, while both of us were in raptures over the Ethiopian espresso. It goes really well in milk, producing a smooth macchiato, but for me, it was at its best on its own, a lovely, subtle, fruity, smooth coffee. If this is what it’s like in the first two weeks, Mythical Coffee has set a very high bar for itself!

December 2020: Mythical Coffee was a runner-up for the 2020 Best Espresso Award.

August 2022: Mythical Coffee now has a second location, Mythical North, which opened in Scottsdale. You can see what I made of it when I visited in January 2023.