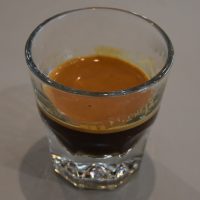 Although this is my sixth visit to Phoenix in under four years, I’ve always stayed in northeast Phoenix or Scottsdale, my speciality coffee focus generally turned towards the centre and the cities to the southeast, such as Tempe and Chandler. However, Peoria’s Driftwood Coffee Co. has been on my radar since it opened in 2017, so when work finished unexpectedly early one afternoon, I took my chance and drove over to pay it a visit.

Driftwood is on the edge of Old Town Peoria, just off Highway 60, which runs northwest out of central Phoenix. Occupying a compact space at the end of a warehouse-like building, Driftwood has a generous outside seating area and a simple, high-ceilinged interior. A true multi-roaster, Driftwood aims to offer at least one Arizona-based roaster and one from elsewhere in America. While I was there, there were two local options, Mythical Coffee (which I’d visited earlier in the week) and Tucson’s Yellow Brick Coffee (which I’d previously enjoyed at Maverick Coffee), while the national offering was from Horizon Line Coffee in Des Moines, Iowa. There’s a concise espresso-based menu, batch brew (for those in a hurry) or a slow bar, offering cafetiere, Chemex or V60.

Driftwood’s address is Jefferson Street, where there is plenty of on-street parking on either side of the street. Standing on Jefferson, Driftwood occupies a small unit at the far, right-hand end of a long, warehouse building which runs along the southern side of Jefferson, ending at the corner with 83rd Avenue. In my mind, this is the front of Driftwood, despite the address. There’s an outdoor seating area here, plus another four parking spaces to the right, while if you do want to come straight in front Jefferson, there’s a door here as well.

Driftwood is in a pretty quiet neighbourhood, so there’s not too much traffic. The outdoor seating area is a self-enclosed square, with a lattice roof which is open to the left and at the back (as you face Driftwood). The other two sides are occupied by an L-shaped bar runs around the front and right-hand sides, seating provided by six stools, three for each bar. Inside, four round, four-person tables are arranged in a square, while off to the left, at the front, is a large trough with continuous running water, presumably for pets and passing horses.

Driftwood has a single glass door in the middle of the front wall, with two tall windows to its left. To the left of these is a narrow bench against the front wall, while off to the right is a small to-go window, so you don’t even have to go inside to get your coffee. However, if you do go in, you’ll find yourself in a rectangular, high-ceilinged space, maybe twice as wide as it is deep, open to a lattice-work of rafters. The counter is to your right, while the seating is ahead of you and to your left, where you’ll also find the second door, in the middle of the left-hand wall, providing a convenient shortcut to/from Jefferson.

Starting to the left of the door, there’s a two-person window-bar, followed by two four-person tables against a low bench which runs along the front wall. There’s a round, seven-person communal table in the middle of the space, while against the back wall are two high, four-person tables with tall stools. These are opposite the door/windows, beyond the communal table and have a large, colourful mural as a backdrop. Finally, to the left, opposite the bench/tables on the front wall, is a long, low sofa with a coffee table and two low-slung plastic chairs.

Overall, Driftwood occupies a clean, bright space, with light from the windows/door at the front, plus the glass door in the left-hand wall, which also has a small window next to it. The walls are whitewashed, other than the left-hand wall, which has been left as exposed breezeblock. Along with the mural, there are black and white prints hanging on the wall. Finally, to the right of the mural, are several retail shelves, which sell various artworks, craft items and the obligatory retail bags of coffee.

The coffee on offer changes every two to three months, depending on how quickly Driftwood gets through its stock. I was tempted by the Honduras single-origin from Mythical Coffee (on the slow bar) but I wanted to try Horizon Line Coffee, a roaster that I’d not seen before. Horizon had an Ethiopian Guji on espresso, plus a Guatemalan on the slow bar (where the third option was from Yellow Brick). Not having had one all week, I opted for an espresso, and was rewarded with a lovely, rich, fruity shot, served in a glass with a glass of sparkling water, the perfect end to my stay.