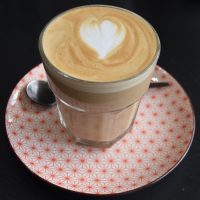 To its credit, Chester’s rapidly expanding speciality coffee scene isn’t confined to the compact, historic city centre. For example, the pioneering Little Yellow Pig has been out in Hoole since 2014, joined by Short + Stout in 2018. Staying to the east of the centre, we now have Ginger Monkey Number 31, conveniently located at 31 Christleton Road in Boughton, a 20-minute stroll out from the city centre.

Ginger Monkey is a relatively new addition to the area, having relocated from its original home in Saltney (a little further out to the west of the city) in December 2020. It occupies a compact spot on the north side of the road, which means that it catches the sun for most of the day. There are a pair of benches outside on the pavement, along with a window-bar and a handful of tables inside.

The coffee is from Crosby Coffee Roasters, with its Trio blend on espresso, where it’s joined by a rotating guest roaster on batch brew. There’s a selection of tea and hot chocolate, along with various iced versions, but the other big draw is the food, concise breakfast and lunch menus being joined by an all-day brunch menu.

Ginger Monkey is a relatively new name to Chester’s speciality coffee scene, having spent a year in Saltney before the COVID-19 pandemic came along. This led to a relocation, leap-frogging the city centre as it moved east to its current location in Boughton last December. Although close to the River Dee, the most direct route from the city is along the busy A51, while a more scenic alternative is offered by the Shropshire Union Canal (adding maybe five minutes to your walk). It’s also well served by multiple bus routes, which stop at the nearby St Paul’s Church.

Ginger Monkey Number 31 occupies a ground floor spot near the eastern end of a row of buildings on the north side of the street. It has a classic old-fashioned shop front, with picture windows flanking a central, recessed door, making the front almost entirely glass. If you want to sit outside, each of window has a simple wooden bench in front of it.

Inside, Ginger Monkey is roughly square, the counter occupying much of the back half, including an enclosed staircase down to a basement kitchen where most of the food preparation takes place. Seating is limited, a combination of current COVID-19 considerations and the relatively small size of the space. There’s a three-person window-bar to the left of the door, while the window to the right is occupied by a broad bench/sofa seat. This is followed by a four-person table, with a short sofa/bench seat against the right-hand wall and two chairs on the other side. Opposite this is a longer sofa/bench seat against the left-hand wall, with a pair of two-person tables, one round and one square.

You order at counter, which is directly ahead of you as you enter, the cakes strategically placed directly under your nose (although reassuringly behind a Perspex screen). To the left, built-in under the counter, is a fridge with soft drinks, while up above, along the left-hand side of the counter, is a small retail selection with beans from house-roaster, Crosby Coffee Roasters, and the current guest roaster.

The enclosed basement staircase is inside the counter on the left, forming an interior wall which is the domain of the espresso machine, while, on the back of the counter, under the simple coffee menu on the wall, is the batch brewer, the ever-reliable Moccamaster. This takes single-origin beans from the guest roaster, which changes every two months and is currently Smokey Barn, all the way from Norwich. The espresso, meanwhile, is provided by the Trio blend from the much nearer Crosby Coffee, just across the Mersey in Liverpool. I opted for this, rewarded with a smooth, classic flat white, served in a glass.

My other reason for visiting Ginger Monkey was for breakfast, which is served until noon, offering various toast/bread options, after which lunch takes over, with a range of bagels and salads. However, I was drawn to the all-day brunch menu, which offers a choice of four toasted brioche buns or one of two cinnamon brunch bakes.

I ordered a toasted brioche bun with avocado, mushroom, tomato and hash brown, which arrived as a massive stack, a base of smashed avocado followed by a single mushroom, thick slice of tomato and a hash brown. Both tasty and filling, it very messy to eat. Not wanting to use my hands too much, I ended up partly deconstructing it and eating it with a knife and fork!

October 2021: Ginger Monkey is now roasting its own coffee!

Liked this? Then take a look at the rest of Chester’s speciality coffee scene with the Coffee Spot Guide to Chester.