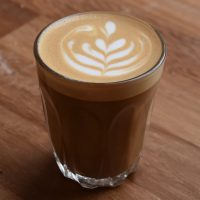 Kookaburra Bakehouse on Goss Street in Chester is the latest venture from the team that brought you Bean & Cole, in partnership with Jess, who bakes all the lovely cakes for Bean & Cole. It opened in July this year, offering a simple menu of excellent espresso-based coffee from Ozone, along with a range of sweet and savoury goodies (although mostly sweet), all baked in the kitchen upstairs.

It’s a tiny place, principally catering to the takeaway trade, although there are a couple of bars offering limited inside seating, where you can sit and chat with whoever is behind the counter (Ian, aka “Bean”, in our case, while his partner, Nicole, is the “Cole” of Bean & Cole). Opening hours are limited for now, from eight o’clock in the morning on Thursday, Friday and Saturday until a nominal two o’clock closing time (or when all the cakes have been sold!).

Kookaburra Bakehouse is on Goss Street, right in the heart of Chester, just north of Watergate Street (itself home to several speciality coffee shops), where a handy sign, tucked away on a wall, points towards Goss Street. Following the sign through a short pedestrian passage, you’ll find Kookaburra on the ground floor of an old, three-storey brick building, set back slightly on the left on the corner with Crook Street.

Kookaburra occupies a small shop front with central double doors, a tall picture window on either side. There’s a similar window around the corner on the right-hand side, while upstairs (which is much larger) is the retail bakery where Jess works her magic. The counter, which is at the back, runs the full width of the shop, while if you’re sitting in, there’s a narrow, three-person bar running the length of the left-hand wall, and a shorter, two-person bar in the window to the right. And that’s it, except for a narrow set of retail shelves in the corner to the right of the window.

The counter is split into two, the left-hand side displaying that day’s cakes, pastries and savouries (such as sandwiches and scrolls). The right-hand side is the domain of the La Marzocco Linea espresso machine and its two Mahlkönig Peak grinders (house blend and decaf). Finally, the menu is on the wall behind the counter, displaying an admirably concise range of drinks.

During our visit, the seasonal Hodson blend from Ozone was in the hopper, Amanda ordering a long black, while I had a piccolo, served in a glass with some awesome latte art (I’m always in awe of anyone doing latte art in such a small space). The Hodson blend has classic chocolate notes, although in my piccolo and combined with the milk (from Peckforton Farm in Cheshire), it had more of a biscuity flavour.

As well as chatting with the barista, the best part of sitting in at Kookaburra is the wonderful baking smells that waft down from above. Naturally, we caved in and bought some pastries to take with us (we’d just had breakfast at The Flower Cup). We could have had anything and been happy, but in the end we narrowed it down to four things.

Two of these, a cinnamon twist and raspberry Danish, were consumed later that day on the banks of the Dee. The cinnamon twist had rich, chewy pastry and lots of cinnamon sugar, while the raspberry Danish had amazingly light, flaky pastry, a delicious, creamy, custard filling and fresh raspberries and dark chocolate shavings on top.

The other two survived a little longer, including a rich, chewy Anzac biscuit, but the highlight was the Nutella cruffin, made with the perfect croissant dough, filled with Nutella and baked in a muffin tin. We had that at home a couple of days later, at which point Amanda demanded I drive to Chester to buy some more. I didn’t have the heart to tell her that Kookaburra was closed and wouldn’t open again until Thursday…

If you enjoyed this Coffee Spot, then take a look at the rest of Chester’s speciality coffee scene with the Coffee Spot Guide to Chester.