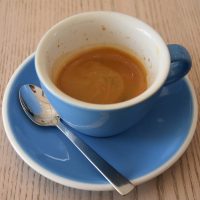 Saucer & Cup is one of those places which has been on my radar since it opened in 2014. However, I’ve never quite been in the right place at the right time for a visit (or, possibly, never made the time/place…). Until last week, that is, when I was in Earlsfield, a mere 20-minute walk away. It was too good an opportunity to miss!

Saucer & Cup is on the other side of Wimbledon Park from the famous All England Law Tennis and Croquet Club, located on Arthur Road, just down the hill from Wimbledon Park tube station on the District Line. From the street, it’s a fairly modest space, but inside, it goes quite a way back, plus there’s a spacious basement.

The focus is on the coffee, which Saucer & Cup backs up with a concise and innovative brunch menu, all the food being prepared in the kitchen, which shares downstairs with the basement seating. Saucer & Cup only offers single-origins, with a seasonal house espresso from Workshop, plus a regularly changing guest espresso (currently Tim Wendelboe). There’s also batch brew filter and, depending on the time of day/how busy things are, you can always ask (nicely) about pour-over.

Saucer & Cup is on Arthur Road, towards the southern end of a dense network of residential streets to the east of Wimbledon Park. A short way down the hill and on the other side of the road from Wimbledon Park tube station, its black and white façade is sandwiched between two striking, green-tiled pillars.

If you want to sit outside on the slightly sloping street, there’s a pair of benches under the windows to the right of the door, with three short, round tables. Opposite them, across the broad pavement, two more benches, with three even shorter wooden cubes for tables, stand by the edge of the road. Alternatively, head inside, where Saucer & Cup occupies a bright, high-ceilinged space. As well windows running right across the front of Saucer & Cup, which catch the sun pretty much all day, there’s another window in the middle of the back wall.

The seating is in two distinct areas, a larger one at the front and a single, communal table at the back, the two separated by the counter (on the right) and the stairs down to the basement (left). Directly ahead of you, a single, four-person table is tucked between the door and stairs. To your right, a wooden bench runs under the windows, then down the right-hand wall, before turning again to run across the front of the counter. There are four two-person tables along the front, a further two tables down the wall and three more in front of the counter (any of which can be pushed together for larger groups).

A wide corridor leads between the stairs and counter (where you order on the right) to a single, 12-person communal table which occupies the entire back quarter of Saucer & Cup (which is narrower than the front). Behind you and to your left, the stairs lead down to the kitchen, occupying the space under the front of Saucer & Cup. Doubling back on yourself again, a corridor runs between the stairs (left) and kitchen (right) to a spacious basement at the back of Saucer & Cup. An old brick fireplace is on the left, while to your right is a six-person table. Finally, an L-shaped bench runs from beyond the fireplace, along the left-hand wall, then across the back, where there’s a matching window (the land behind Saucer & Cup drops steeply away).

Having just lunched at Bean and Hop, I passed on the tempting brunch menu and its range of classic dishes with some interesting twists. Instead, I settled for a slice of flourless chocolate and almond cake, topped with a thick layer of chocolate icing, which was excellent.

Turning to coffee, I asked what was on espresso and was told that I could have something out of the ordinary or something more rounded. Naturally, I said “out of the ordinary, please”, the barista offering to tell me all about it, but only once I’d drunk it. My coffee, a double shot pulled on the Synesso Hydra on the front of the counter, was served as in an oversized classic blue cup. It was definitely different, with a pleasing acidity on the first two sips, but without the brightness that attacks the sides of my mouth. Instead, it was all front of the mouth, but beyond that, my palate lets me down and I can’t really say much, except that I liked it.

My barista explained that it was the guest espresso, the Karogoto, a washed coffee from smallholder farmers in Nyeri, Kenya, roasted by Oslo’s Tim Wendelboe. Saucer & Cup gets a kilo or two of each guest, which is on until it runs out. The good news is that there should still be some left this week (if you’re quick)!