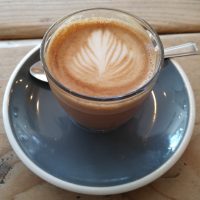 For as long as I’ve lived in Guildford, Earlsfield’s been one of those stations that I’ve sped through on my way to London Waterloo (unless on the slow train to Clapham Junction, when it’s been the signal to get ready since Clapham Junction is the next stop). That is, until Tuesday, when I decided to get off at Earlsfield Station and see what the area has to offer, starting with today’s Coffee Spot, Bean and Hop, a three-minute walk south of the station.

Bean and Hop styles itself craft beer, coffee and brunch, although I’d be inclined to reverse that order (and add wine and cocktails to the list).  Occupying a sunny spot on Garratt Lane, it’s a bustling, friendly (and dog-friendly) place with plenty of seating, plus more tables outside. There’s an extensive brunch menu, with the kitchen open until three, while the coffee comes from Nude Espresso, which roasts an exclusive single-origin from Santa Ana in El Salvador (the home of Coffeeland) which is used at Bean and Hop and its two siblings, Café Tamra and Café Fleur. This is available via a standard espresso-based menu, backed up with tea, smoothies and a small range of cocktails.

Bean and Hop has been under its current ownership since 2017, part of a local group that includes Café Tamra (the first) and recent addition Café Fleur. Each does its own thing and they’re very much their own places, with Bean and Hop providing its excellent brunch menu from the corner of Garratt Lane and Trewint Street.

On the right as you wander down from the station, the 44, 77 and 270 buses stop in front of Bean and Hop. About twice as wide as it is deep, the long side faces Garratt Lane, where a row of three two-person tables occupies the pavement between the bus stop and the corner with the quieter Trewint Street, where you’ll find two more tables. The two streets are at about 60° to each other, while the door, which is on the corner, shows no favouritism, being at 60° to both.

Inside, Bean and Hop is rectangular, with the right-hand end cut off by Trewint Street, so it gets narrower as it goes back. There’s a pair of windows down this side, followed by a whitewashed wall, while a further seven windows run all the way along the front, making Bean and Hop a wonderfully bright space. The counter occupies the left-hand end, where you order takeaway at the till, next to the La Marzocco Linea espresso machine, which is in the window at the left-hand end of the counter. The cakes are displayed to your right along the front of the counter, which doubles as the bar, complete with some (currently out of use) bar stools. Alternatively, if you’re sitting in, wait by the door for someone to show you to a free table.

Bean and Hop has a five-person bar in the first four windows along the front, while between a narrow pillar and the counter is a taller two-person bar. Another window-bar runs down the right-hand side, occupying both windows before continuing a short way along the wall. It ends just short of the back wall, with a square, two-person table filling the gap.

The remaining seating is arranged in three rows running the widthways across Bean and Hop. The first is directly behind the window-bars at the front, with a tall, four-person table by counter, followed by a low four-person table and a pair of square, two-person tables, the last one directly ahead of you as you enter. Behind them is a slightly shorter row (due to sloping wall) consisting of two tall, four-person tables. Finally, the shortest row of all runs along a padded bench against back wall, where you’ll find three square, two-person tables. Seating is provided by a mix of stools (high tables), conventional chairs (low tables) and wooden-topped barrels (window-bars and tables at the back).

I visited Bean and Hop for brunch, finding plenty of options on the menu, including familiar classics featuring various egg and avocado combinations on toast. I was sorely tempted by these, as well as the pancake stacks, but I decided to branch out a little, ordering the Full Lebanese Breakfast instead.

This was an interesting combination of tastes and textures, with scrambled eggs, spinach falafel, hummus, roast tomatoes, pickled turnip, za’atar yoghurt and grilled halloumi, all with a side of sourdough toast. By default, it’s vegetarian, although there is a vegan option (swap scrambled tofu for eggs and mushrooms for halloumi).

I paired this with a cortado, which was served in a glass. The coffee and milk (from Brades Farm) went well together, producing a smooth drink with classic chocolate notes, the perfect accompaniment to my breakfast.

3 thoughts on “Bean and Hop”