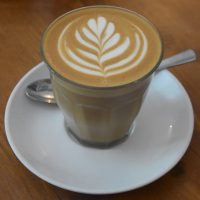 On my way back from my recent visit to Berlin, I stopped in Köln for a few days, a city I’d previously only passed through. With just a couple of days to explore, I found a vibrant (albeit small but growing) speciality coffee scene, starting with The Coffee Gang, conveniently located around the corner from my hotel (which might have influenced my choice of lodging). In all, I visited three times, twice for breakfast, once for coffee and cake.

The Coffee Gang, which recently opened a second location north of the centre, has been serving up excellent coffee to the good folks of Köln since 2014. Located just north of the major interchange of Barbarossaplatz on the eastern side of the broad Hohenstaufenring, The Coffee Gang offers a bespoke espresso blend through a standard menu, plus two single-origins (all roasted by Munich’s JB Kaffee) on either batch brew or AeroPress. There’s also limited breakfast and lunch menus, plus various cakes. You can either sit outside, where six tables occupy the broad pavement in front of The Coffee Gang, or inside, where you have a choice of any of the 15 hexagonal tables which are mostly down the right-hand side.

The Coffee Gang is on the western side of Hohenstaufenring, part of the semi-circular ring-road surrounding the centre of Köln on the western bank of the Rhine. On the ground floor of an elegant apartment building, sandwiched between two of a more modern variety, there’s ample outside seating with six three-person tables set back from the busy road, arranged in two rows of three. Two large, black parasols stand ready to be unfurled in the event of bright sunshine or rain.

The front of The Coffee Gang is almost all glass, its slightly recessed central door flanked by windows. The counter is directly in front of the door, extending to your left along the back of The Coffee Gang. You order here, the menu conveniently written on the wall above/behind the counter. To your left, retail shelves, with bags of coffee and coffee equipment, line the short wall, while at the front, slightly behind you as enter, is a solitary, low hexagonal table with four low stools.

You could be forgiven for thinking that The Coffee Gang is quite small, since although fairly wide, it’s very shallow. However, on the right-hand side, beyond the counter, the coffee shop extends a long way back, where a tall, narrow corridor houses most of the seating. Its back wall is decorated with window-panes, while stairs lead down to the toilets in the basement.

A bench runs along the right-hand wall at the front of The Coffee Gang, lined with five low, hexagonal tables, each seating two, although the tables in the window at the front and at the back each have an additional stool. Through what would have been a doorway in the back wall, the corridor has another nine tables. Also hexagonal, these are slightly higher, four lining a bench against the right-hand wall, while the bench on the left has five. Each table seats two people, although you might squeeze in three at a pinch.

I made three visits in all, starting with breakfast on my first day in Köln. The Coffee Gang has an exclusive house blend, roasted on its behalf by JB Kaffee. I tried this as a flat white, the milk and coffee in perfect harmony, producing a smooth flat white with classic chocolate notes. I paired this with one of The Coffee Gang’s toasted sandwiches (an excellent mozzarella, tomato and spinach ciabatta). These are made fresh each morning and, once they’re gone, that’s it.

I also grabbed a batch brew to go in my Frank Green Ceramic cup. Made with a Brazilian single-origin, I enjoyed it on the train on my way to Mainz. Rich and fruity, it was very impressive, the Frank Green Ceramic doing an excellent job of keeping it warm for several hours.

I returned the following evening for more filter coffee. The Coffee Gang has a pair of single-origins, roasted by JB Kaffee and dispatched each week. The staff said that they have little say in the matter, JB Kaffee sending whatever it feels is appropriate, so each week is a surprise! Having had the Brazilian the day before, I went for the other one, a Rwandan, which I had as an AeroPress. This was just as good, but very different, best described as funky, which I paired with a slice of the rich, creamy New York Cheesecake.

My final visit was on my last day, again for breakfast, this time ordering the granola, a massive bowl of yoghurt, topped with crunchy granola and lots of fresh blueberries, plus flaked almonds. It was awesome, the best coffee shop granola I’ve ever had. I paired this with a cortado this time, which, taste-wise, was very similar to the flat white, the coffee cutting through just a little bit more.

1 thought on “The Coffee Gang, Hohenstaufenring”