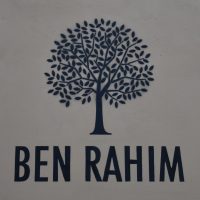 Ben Rahim, one of Berlin’s lesser-known speciality coffee names (outside of Berlin that is), came highly recommended by various people, both online and in other Berlin speciality coffee shops that I visited. It also features in the Double Skinny Macchiato guide to Mitte and Prenzlauer Berg. Ben Rahim is unusual in that its owner is from Tunisia and, having recently opened a shop in Tunis, it’s technically an international coffee shop chain (of two).

Ben Rahim opened in 2015, occupying a small shop on an alleyway leading into the famous Hackesche Höfe in Mitte in the heart of Berlin. Towards the end of 2019, Ben Rahim expanded into the adjacent space, now its current home, when the previous tenants, a clothes shop, moved out. All the coffee is roasted in Berlin on behalf of Ben Rahim, with a blend, a single-origin and decaf on espresso, backed up by a blend and two more single-origins on filter via the Clever Dripper. True to its Tunisian origins, these two single-origins are also offered via the ibrik, along with a range of signature drinks and a small selection tea, all backed up by a small range of cakes, pastries and filled croissants.

While Ben Rahim’s address is Sophienstraße, it’s actually part of the Hackesche Höfe, a series of interconnected Art Nouveau courtyards dating from 1906. There are many ways to reach Ben Rahim, which is in Hof VI, aka Sophienhof, aka Courtyard 6. I recommend a stroll through the complex, starting from the entrance on Rosenthaler Straße, in which case Ben Rahim will be ahead of you in the far, right-hand corner of Sophienhof. Alternatively, stroll through the beautiful Rosenhöfe, another courtyard which links Rosenthaler Straße with Sophienhof, where you’ll find Ben Rahim on the right. Finally, there’s the entrance on Sophienstraße, a broad passageway leading you past the original home of Ben Rahim and into Sophienhof, where the new location is on your left.

Ben Rahim’s on the ground floor of a more modern L-shaped building, occupying one corner of the courtyard, with three floors of apartments above. Approaching through the Hackesche Höfe, the outside seating is on the left, tucked into the crooked of the L, the rest of Ben Rahim to the right and behind it. There’s as much seating on the cobbled courtyard as there is inside, with benches delineating all four edges. Five tile-topped tables with low, wooden stools run down the left-hand side with a further table at the front, and another at the back, where the bench runs along the wall, stopping at the door, which is on the right. There’s one more table, a plain, wooden stool, right in the middle.

Walking through the outside seating, a narrow path along the benches on the right-hand side leads to the door. Go past the retail shelves on the left-hand wall to the counter, which runs the full width of the back wall. A one-way system starts on the left, by the cakes and till, where you order. Then move along the counter, past the ibriks and Clever Drippers to the espresso machine at the far end, where you collect your drinks.

From here, retrace your steps to sit outside, or, turning around, head down the right-hand side of Ben Rahim, where six tables line a bench along the wall on your left. To the right, a low, bar-like table runs along the windows, seating provided by low, wooden stools. Finally there’s a table and bench at then far end, behind which French windows can be opened in good weather.

Initially the coffee was roasted by Square Mile, but since the COVID-19 pandemic, it’s roasted in Berlin on behalf of Ben Rahim. On my first visit, on Saturday morning, I began with a flat white made using the Backyard blend, which was smooth and gentle, the perfect start to my weekend. Tempted by the smell of freshly-baked pain au chocolat, I ordered one, which was very fine, with rich, flaky pastry.

Ben Rahim was very busy over the weekend, so I returned on Monday for some more photographs and to try the ibrik, the traditional Arabic coffee pot. There’s a choice of two single-origins, the Sidi Bou, a naturally-processed Peruvian coffee, and the Shiferaw Jigso, a washed coffee with a 48-hour fermentation stage, from Kochere in Ethiopia, which I ended up having.

It takes around five minutes to make an ibrik, so I took a seat inside, having previously sat in the courtyard, returning to the counter when my coffee was ready. Served in a cup, presented on a small tray with a bottle of water and a date, the recommendation is to allow it cool for two minutes, which I did, with a further recommendation that the longer you leave it, the sweeter gets. The first sip wasn’t particularly sweet, nor was it bitter. Not as intense as an espresso, it was more like a good filter coffee in short form, which did indeed get sweeter towards the end, although never completely empty your cup, since there’s a layer of sludge at the bottom!

You can see what Bex of Double Skinny Macchiato made of Ben Rahim when she visited in May 2019, when Ben Rahin was still in its original home.

Liked this? Then take a look at the rest of Berlin’s speciality coffee scene with the Coffee Spot Guide to Berlin.