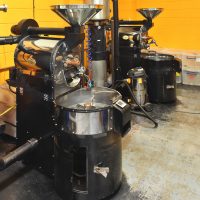 Today’s Meet the Roaster is Adams + Russell, a speciality coffee roaster and fixture of Birkenhead’s coffee scene ever since Mr Adams + Mr Russell first set up shop on an industrial estate near Birkenhead Central station in 1978. Although both founders have moved on, the company hasn’t gone very far in the intervening 44 years, the biggest change coming 10 years ago when expansion saw Adams + Russell relocate to its current home on the same industrial estate.

The same cannot be said for its coffee, though. While still best known in The Wirral and the northwest, Adams + Russell has an increasingly global reach, supplying customers as far afield as South Korea and Iceland’s Skool Beans. Adams + Russell’s philosophy has also come a long way since those early days, when dark-roast blends were its backbone. While the dark-roast blends remain, Adams + Russell has embraced speciality coffee and adopted the lighter roasts beloved of third-wave coffee aficionados to produce a truly impressive range of blends, single-origins and micro lots.

I first came across Adams + Russell in 2015 at Moon Beer & Coffee in Chester (now sadly long since gone). Since then, I’ve noticed the name more and more as I’ve explored the speciality coffee scene in the northwest and, in particular, in The Wirral, where Adams + Russell supplies the likes of Elephant Coffee and Elephant Lounge. At the start of the month, I was visiting Bloom Building and Coffee in Birkenhead and, realising that I was about a 20-minute walk from the Adams + Russell roastery, I decided to pop over, being rewarded with a behind-the-scenes tour.

Adams + Russell occupies a standard industrial unit, open to the A-frame roof, where multiple skylights provide plenty of light. All the usual components are there, including a large green bean store, packing and dispatch areas and small, self-contained offices along the right-hand side. There’s also a training area at the front, where Adams + Russell wholesale customers can work with a variety of espresso machines.

The heart of the operation is right at the back, where two Toper roasters turn out all the coffee. There’s a smaller 10 kg Toper, along with a slightly larger 15 kg model. When operating at full tilt, they can generate a fair amount of heat which, when the sun is streaming in through the skylights in the summer, can make for a very warm working environment, hot enough to require Adams + Russell to tweak the roasting profiles through the day as things heat up.

The recent story of Adams + Russell has been one of expansion, particularly in the last five years, where there’s been a focus on improving quality. While the majority of the green beans still come through the traditional route of using importers such as DR Wakefield, increasingly Adams + Russell is moving towards direct trade, as well as buying smaller lots, including micro lots, from specific farms. Here traceability is becoming increasingly important, with QR codes on the coffee providing traceability information all the way back to the farm.

All this growth has come without abandoning Adams + Russell’s roots and its traditional customer base. This is why you’ll still find occasional sacks of Robusta coffee sitting side-by-side with high-grade Arabica beans in the roastery, while on the shelves, old school dark roasts rub shoulders with Adams + Russell’s range of medium and lighter roasts. In recent years, Adams + Russell’s coffee has begun to win Great Taste Awards, while it has been adding some very special coffees to the range. Recent stock include a Gesha and a Jamaican Blue Mountain, while Adams + Russell are currently offering a Kenyan Blue Mountain.

However, having such a wide range of coffee brings its own challenges. Carrying so many different green beans, each with its own unique roast profile, is logistically very complicated, so in the future Adams + Russell expects to narrow its range somewhat, carrying fewer different origins, although I expect that the range will still be large compared to most speciality roasters.

Another issue is with freshness, since the last thing that Adams + Russell wants is large quantities of stock sitting around for weeks after roasting. For example, if you come into the roastery to buy coffee, rather than picking a bag off the shelf (which are for display purposes only), the staff disappear into the back to fill your bag to order.

Whatever the future holds, I’m looking forward to seeing Adams + Russell continuing its growth and finding its coffee on the shelves and in the hoppers in an increasing number of speciality coffee shops.

July 2022: Adams + Russell very kindly gave me some coffee to take with me on my upcoming trip to California, including a bag of the Kenya Blue Mountain Jungle Estate, which I gave as a gift to the staff at Linea Coffee Roastery in San Francisco.