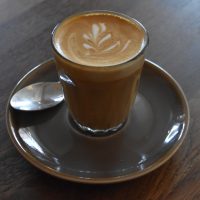 When I popped over to The Wirral last year, I visited Parkgate’s Elephant Lounge. Coffee shop by day, bar by night, Elephant Lounge is part of Elephant Collective, which started life in nearby Neston. On my return to The Wirral last week, this time travelling by train, it was only natural that I hopped off at Neston Station, the first stop (in England) as I headed north on the Borderlands Line. From there, a five-minute stroll down the High Street took me past Elephant Bank (a smokehouse and bar which is the latest addition to the family) to Elephant Coffee, where it all started in 2012.

A more traditional coffee shop, Elephant Coffee occupies a cosy spot on the corner with Chester Road. Three two-person tables line the pavement on the busy street, while inside you’re faced by the counter with limited seating along the front. However, there are plenty more tables around the corner, Elephant Coffee stretching a surprisingly long way back. The coffee offering is based around a bespoke seasonal espresso blend, while if you’re hungry, porridge and various bread-based options are available for breakfast, with bagels and soup for lunch, backed up by a range of cakes.

Elephant Coffee occupies the ground floor of what was once two separate terraced houses, the last of a row at the southern end of Neston’s busy High Street. The two halves are very distinct when seen from the front, the left-hand side being almost windows, the door inset at the far left-hand end. In contrast, the right-hand side has two narrow, tall windows either side of what might have been the front door, but is now a black-painted brick wall.

The distinction continues inside, where at first Elephant Coffee feels quite small. Stepping through the door, you’re faced by the counter, which runs along the back wall of the left-hand half. Opposite this, immediately to your right, is a narrow four-person window-bar with tall stools, two of which have pedals attached. Foolishly, I didn’t think to ask what that was all about.

Carrying on, there’s a pair of armchairs opposite the end of the counter, then, in the front, right-hand corner, in the window and catching the sun pretty much all day, are three more armchairs, arranged around a small, round coffee table. If that’s all there was to Elephant Coffee, it would be a fairly select, cosy spot, but there’s more, the right-hand half extending all the way to the back of the building.

It’s surprisingly bright back here, particularly as there aren’t many windows, just one at the front, another halfway down (which looks from the outside like it might also have been a door) and a very small, square window at the back. However, borrowed light from the sunny front of the shop, plus plenty of light bulbs more than compensate for that, everything combining to create a warm, welcoming space.

Elephant Coffee has a standard espresso-based menu using the bespoke seasonal house blend, Dé Jà Brew, roasted up the road in Birkenhead by Adams + Russell. You can buy retail bags of the coffee to take home with you, as well as a single-origin or decaf, available as either beans or pre-ground for various coffee-preparation methods. These are displayed on retail shelves on the front wall between the two sets of armchairs.

You order at the counter, where, if you aren’t staying, you can stand and watch your coffee being made on the yellow La Marzocco Linea at the back of the counter. Alternatively, if you’re staying, find a seat and your coffee will be brought to you. There’s also a range of cakes in the display case on the left-hand side of the counter, along freshly-baked bagels with various fillings, all made at Elephant Bakehouse (conveniently located behind Elephant Lounge in Parkgate, but not open to the public).

Unfortunately, I already had plans for lunch at Lateral, otherwise I’d have been very tempted by one of the bagels. Instead I settled for a cortado, having tried the Dé Jà Brew as an espresso when I was at Elephant Lounge last year. I remember it as a classic blend, with notes of chocolate and nuts and it certainly didn’t disappoint in my cortado, the coffee’s distinctive flavours coming strongly through the milk. And with that, I was on my way.