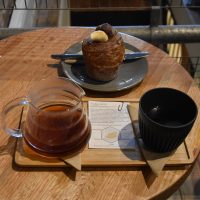 Crosby Coffee is another north west roaster that’s been on my radar for a while. It started life in 2014, pleasingly enough in Crosby, on the Lancashire coast, just north of Liverpool. These days Crosby (or, more technically, Waterloo, just to the south) is home to the original coffee shop and roastery, but since October last year, there’s been a second Crosby Coffee coffee shop, this one on Lark Lane in Aigburgh, just south of Liverpool city centre, which I visited last month.

Crosby Coffee is a few doors down from Press Bros Coffee, beating Press Bros to opening by just one week. It’s a very different proposition though, much more of a tradition coffee shop, with three options on espresso (blend, single-origin and decaf), all served from a standard menu, along with filter options through the V60 and AeroPress, hot chocolate and a wide range of teas.

All the coffee is roasted in-house and is available for sale, along with the tea. You can also add a selection of cakes and pastries, which are joined by a handful of savoury options. Crosby Coffee is one of a growing number of coffee shops which use the HuskeeCup for sit-in customers.

Crosby Coffee is in the leafy suburb of Aigburgh, well connected by both train and bus to the city centre. Towards the northern end of Lark Lane, it’s on the right heading towards Sefton Park. From the street, there doesn’t seem to be too much to it, a narrow façade with three tall, thin windows on the left, the door to the right. If you want to sit outside, three tables run along a bench under the windows, while bollards and a large flower box (matching Crosby Coffee’s black and white colour scheme) have reclaimed part of the street, effectively doubling the width of the pavement.

Inside, Crosby Coffee reveals its true self, with a classic exposed brick and wooden floorboard look. Long and thin, it goes a long way back, providing plenty of seating options. These start at the front, a low four-person window-bar running the full width of all three windows to the left of the door. The counter is on the left, set back from the windows, while on the right, following a tall set of retail shelves, is another a four-person bar along the exposed brick of the right-hand wall.

This ends at the top of a semi-open staircase leading to the basement. Staying upstairs, the seating continues after the counter, a row of three four-person tables running along a padded bench against the left-hand wall, ending at the enclosed kitchen, while the coffee shop keeps going on the right. There’s a single two-person table immediately behind the staircase on the right, while against the wall of the kitchen is a six-person table with stools.

The basement is a more modest affair with a small seating area, roughly under the counter, while at the front, Crosby Coffee has a training room/staff area (off-limits to the public). An L-shaped table runs along the back and left-hand walls of the basement, with chairs for four people and multiple power outlets, making it popular with laptop users.

Whether you’re sitting upstairs, downstairs or outside, you order at the front of the counter, where there’s a selection of cakes, pastries and a handful of savoury options in a large glass display case. There are plans to offer a wider range, but this is currently limited by the lack of ventilation in the kitchen. You’ll also find the pour-over options here, with one single-origin available through the V60 and another through the AeroPress.

The drinks menu, meanwhile, is on the wall behind the counter, with the Conti espresso machine at the far end on the right. This has three Compak grinders, offering decaf, a single-origin and a blend. During my visit, these were the Passiflora Decaf, the Sasini, a single-origin Kenyan, and the Iron Men, a blend of Guatemalan, Honduran and Brazilian coffees.

Much as I was tempted by the Sanini, I had my head turned by the Ruby Hills, a honey-processed coffee grown by the Arrow Brothers in Myanmar, imported by Indochina Coffee, which was available on the V60 during my visit. This proved to be a full-bodied coffee, but at the same time was lovely, smooth and sweet, a real treat.

I was going to pair it with a cinnamon bun, but my head was turned again, this time by the Nutella cruffin. A muffin made with croissant dough and stuffed with Nutella, it was every bit as good (and sugary) as it sounds, the rich croissant dough pairing perfectly with the Nutella.

However, I’ll leave you with a word of thanks to my baristas, Ben and Bex, who looked after me during my visit and who were lovely.