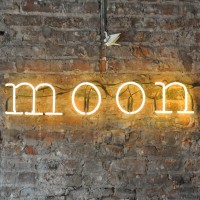 I first came across what was then the Harvest-Moon Espresso Bar a couple of years ago, not long after it had opened in Chester and it’s been on my radar ever since. I popped by in 2013, but it was unexpectedly closed that day and I hadn’t had another chance until now.

In that time, Harvest-Moon has undergone some changes, not least a name change to Moon Beer & Coffee after getting a licence in November last year (although the signage and some of the social media hasn’t caught up yet). While the focus is still on coffee, with an old-school espresso menu based around a house-blend from Merseyside roasters Coffee 1652, plus regularly-rotating guests, Moon now offers bottled craft beer from around the world. There’s also food with an American slant. For breakfast: toast, porridge or bagels, with more bagels and sandwiches for lunch. Finally nacho or chilli bowls, plus hummus and Bavarian meat platters, are on offer.

Just around the corner from the Cathedral with the library across the street, Moon is a cosy spot. There’s not much seating, which spread across two inter-connected spaces, while the staff are friendly and engaging with both regulars and visitors alike.

December 2015: Moon Beer & Coffee closed in the summer, which is a real shame.

Moon Beer and Coffee’s narrow front, with its slightly recessed door in centre, is wall-to-floor glass, making the front of the store very bright. In the left-hand window, and extending along the wall behind, is an L-shaped, three-person bar, while at the back, on the left-hand side, is the counter. Between them is a four-person, square table, while, on the right, a little recess has a padded wooden bench and two tables. With the exception of the recess, everywhere’s bare brick and wooden laminate flooring, with gorgeous wooden furniture throughout. The counter is white-tiled and wooden-topped, with just enough room for the two-group La Marzocco and the cake. Three grinders (house-blend, decaf and guest) are on a shelf behind the counter.

In a gap in the back wall to the right of the counter, a step leads up to the back room. The bare brick and wood theme continues here, although a lack of windows make it dark in a cosy, snug sort of way. There’s not much seating, just a four-person table directly in front of you and, to the right, a long table with two wooden benches/pews. A two-person bar, which had been colonised by the staff while I was there, is on the left by the step. Finally, there’s an enticing flight of stairs down to (I’m guessing) an office and kitchen, but they’re sadly staff only.

The atmosphere was enhanced by some good music, including plenty of rhythm ‘n’ blues. While I loved it, it was quite loud and might be annoying if not to your taste.

The house-blend is from Coffee 1652, which also supplies the decaf. During my visit, these were an El Salvador Monte Sion and, on decaf, a Nicaraguan Maragogype Borurbon. I asked about the guest bean, which changes every two to three weeks, but no-one had told the two baristas what it was. We discovered it was from Adams + Russell in nearby Birkenhead and that it was really dark, so we all tried it. Of the three of us, I probably enjoyed it the most: very old school, bitter, but not unpleasantly so (although my third-wave friends would probably disown me for saying so). Even so, you’d probably only want a single shot since it has all the subtly of a punch in the mouth.

I also tried a single espresso of the house-blend which was a much more subtle, well-balanced coffee. A little sour for my palette, I felt it came into its own in milk. I had it as a flat white and found it a strong, smooth coffee which, while not as sweet as some, stood up well in large volumes of milk, which is what the majority of customers were ordering.

There are also 15 bottled craft beers, plus wine, either by the glass or bottle, with a choice of Prosecco (bottle only), white and red. Despite the American-sounding names, the beer’s mainly from British craft brewers, but there were offerings from Kona in Hawaii and Belgium Vedett.

Needing something to soak up the caffeine, I pondered a choice of gluten-free chocolate cake, carrot cake and gluten-free Nutella cake. I had the last slice of the Nutella one since it looked lonely all by itself. It was very dense (in a good way), nutty and chocolaty.

If you enjoyed this Coffee Spot, then take a look at the rest of Chester’s speciality coffee scene with the Coffee Spot Guide to Chester.