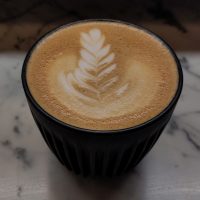 Welcome to a new, occasional feature for the Coffee Spot, the Saturday Snapshot, Coffee Spots that, for one reason or another, I’m unable to do a full write-up on. The inaugural Saturday Snapshot features Devoción, one of many places from my recent trip to New York City. Devoción is a coffee shop/roaster chain that works directly with farmers in Colombia, where it owns a coffee mill. There are four coffee shops, three in Brooklyn and the subject of today’s Saturday Snapshot, on E 20th Street in the Flat Iron District.

Devoción has two options on espresso, plus decaf, batch brew filter and, from memory, two options on pour-over through the Kalita Wave filter. A beautiful space, with plenty of seating, it was consistently full and busy the three times that I visited, which is why I wasn’t able to do a full write up or get very many pictures.

Devoción is on the north side of E 20th Street, just a block and a half from my office, which made it a convenient spot for the morning and afternoon coffee breaks. It’s fairly modest from the outside, not helped by the building being swathed in scaffolding, which explains the lack of exterior pictures. However, stepping inside, you immediately realise that you are somewhere really special.

Long and thin, Devoción stretches out ahead of you, the shop maybe four times as deep as it is wide. It’s also very tall, the high ceilings adding to the sense of space. There’s a single, large window to the right of the door, which brings you in on the left-hand side, while there’s additional (natural) light from pair of tall windows behind the counter in the back wall.

Devoción has a simple elegance about it, with bare floorboards and exposed brick walls, while the sense of space is enhanced by a large mirror on the right-hand wall. The left-hand side has been kept clear, leaving a direct route to the counter at the back, which takes you past a set of retail shelves about half way along the wall. Meanwhile, the seating is arranged in two rows, one down the middle, the other against the right-hand wall. It’s mostly two-person tables, but there’s a large sofa at the front, against the right-hand wall, and a second at the back, its back to the counter.

You order at the left-hand end of the counter, where you’ll find the pour-over choices, with the menu on the wall behind the counter, tucked in between the two windows. You then shuffle along to the right, passing behind the sofa as you do, to the right-hand end, where there’s space for you to wait for your coffee. Along the way you’ll pass the pour-over station and the elegant Dalla Corte espresso machine, the first one I’ve seen in North America.

I visited three times, having a flat white, an espresso and a pour-over. Devoción uses its Honey blend for milk-based drinks, the coffee going very nicely with the milk to produce a rich, smooth drink. The milk was also perfectly steamed, holding the latte art all the way to the bottom of the cup. The Toro blend is used for espressos and Americanos, producing a rich, full-bodied shot which I enjoyed in my Kaffeeform cup (Devoción has proper cups for sit-in customers, but since I was ordering to go each time, I brought my own). Finally, I had a pour-over, made using the Las Rosas, a limited-edition Pink Borbón varietal which was excellent, proving to be very rich and fruity in the cup.