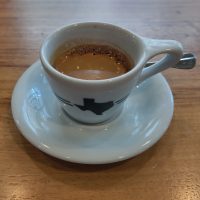 Today’s Saturday Snapshot, Houndstooth Coffee in downtown Austin, is the second in the series and shares a lot with the first, Devoción in New York City. Like Devoción, which was a mere block and a half from where I was working in New York, Houndstooth was just around the corner from my workplace in downtown Austin and, like Devoción, it was perpetually busy. I called in twice a day from three straight days, either for morning coffee on my way to the office or during various coffee breaks.

There are two options on espresso, a house blend and a single-origin, both of which change every day or so. There’s also batch brew filter and pour-over, although you have to know to ask for that. All the coffee is from Tweed Coffee Roasters, Houndstooth’s sister company, which is based in Dallas, where Houndstooth has three more locations to go with its five Austin coffee shops. While it’s mostly about the coffee, if you’re hungry, Houndstooth has breakfast tacos and a selection of cakes/pastries.

This is Houndstooth Coffee’s second location, which opened in 2012, two years after the original on North Lamar in Austin. Located on the ground floor of the Frost Bank Tower, it’s on the corner of Congress Avenue and East 4th Street, with an entrance from an open patio on the corner of the building, another from the lobby and a third direct from 4th Street, which is the one I used. This opens into a sunken stairwell which runs to your right, going up maybe half a floor to the main level.

The layout is fairly simple. There are a handful of tables outside on the patio, while inside, a row of tables runs down the left-hand side, where a glass wall separates Houndstooth from the lobby of the Frost Bank Tower. The tables stop short of the far end, which is where you’ll find the counter, leaving space for a door into the lobby. To the right, there are more tables along the front of Houndstooth and then there’s an L-shaped bar around the stairwell from 4th Street. Finally, you can sit at the counter itself.

The counter runs almost the full width of the far wall, with the espresso machine, a lovely Kees van der Westen Spirit, on the left and the till in the middle. If you sit down the left-hand side (by the door from the lobby) you get a good view of the espresso machine in action, while if you sit down the right-hand side, where there are another four stools, the pour-over station is right under your nose.

My first visit was on Monday morning, for a pre-work flat white. Made with one of the house blends, Timepiece, this went very well with the milk in my HuskeeCup. I returned at lunchtime for a quick espresso, this time made with the single-origin, the Mazateca Reserve from Mexico.

The following day I had a cortado during my mid-morning coffee break, which was served in a glass. Once again, I had the single-origin, only this time it was the Brisas Reserve from Colombia, which combined with the milk for a very sweet coffee. That afternoon I popped back after work for a pour-over, having seen the kettles at the far end of the counter. This was a very traditional Ethiopian (the Bonde), a light, floral coffee, made using the Kalita Wave.

Finally, I stopped by twice on Wednesday, once in the morning for another pre-work flat white and again in the afternoon for an espresso. By this time, Timepiece had been replaced by another house blend, The Vixen, which I had on both occasions. While it was okay on its own, I much preferred it in milk, where it went really well in my flat white.

You can also see what Bex of Double Skinny Macchiato made of Houndstooth when she visited in 2018 in her Austin Speciality Coffee Guide.