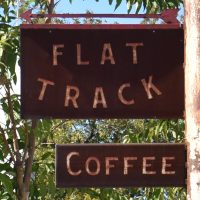 By making Flat Track Coffee my first speciality coffee stop in Austin, I was following in the footsteps of my friend Bex of Double Skinny Macchiato fame. Not only was I using Bex’s Austin Speciality Coffee Guide as my roadmap, but Flat Track Coffee had been her first stop as well. Co-located with bike shop, Cycleast, Flat Track is on Cesar Chavez Street, a main east-west thoroughfare through East Austin.

When Bex visited in 2018, Flat Track roasted all of its own coffee in the back of the store. Since then, the roasting has been moved to sister shop, Palomino Coffee (which, sadly, I didn’t have time to visit), freeing up much needed additional interior seating to go with outdoor seating on the forecourt in front of Flat Track, along with the gorgeous hidden patio along the building’s left-hand side.

Flat Track offers a blend and single-origin on espresso, along with batch-brew filter and pour-over, all the coffee changing on a seasonal basis. Espresso shots are pulled on a lovely Kees van der Westen Mirage, while pour-overs are made through the Kalita Wave using the Curtis Gold Cup automated system. Meanwhile, if you’re hungry, there’s a small selection of cakes/pastries.

On the south side of Cesar Chavez Street, near its junction with Chalmers Avenue, Flat Track Coffee was a convenient 20-minute stroll from my riverside hotel. It occupies the left-hand side of a long, single-storey building set back from the road next to the gas station on the corner, with Cycleast taking up the right-hand half.

There are five parking spaces in front of Flat Track and Cycleast, arranged so that you can pull in from the street. There’s then a gap on the right, in front of Cycleast, while to the left, in front of Flat Track, there’s a neat seating area, an L-shaped bar separating it from the parking at the front and the gas station to the left. Six tall stools line the front of the bar, three more down the side, while the enclosed space is occupied by two wooden picnic-style tables.

Broad glass double doors lead into Flat Track/Cycleast, with a narrow wooden bench running under the large window to the left of the door. Inside, a dividing wall which starts about a third of the way back, splits the building into two equal halves. On the right are the bicycles of Cycleast, while on the left, set well back from the window against the left-hand wall, is Flat Track’s large counter. A four-person window-bar runs the width of Flat Track’s half of the store, although it’s only really used when it’s quiet since the queue (which often snakes around into Cycleast’s half of the store) makes it impossible to sit there. There’s also a retail area against the left-hand wall between counter and window, with merchandising and retail bags of coffee.

You order at the front of the counter, where you’ll find the till on the left, with the menu on the left-hand wall. You then move to your right, pausing to admire the Kees van der Westen two-group Mirage espresso machine on the corner, before collecting your coffee down the right-hand side. You can then take your pick of the seating, starting with the four tall stools running along the back of the counter, ideal for barista watching.

Beyond the counter, a large space runs all the way to the back of the store, once home to the roastery. These days it houses the bulk of the indoor seating, with two six-person communal tables on the right and a row of four two-person tables along the left-hand wall, culminating in a three-person bar. Finally, against the back wall, two sofas face each other across a low coffee table.

Tucked away in the back, left-hand corner between the bar and the back of one of the sofas is the door the patio, a lovely, sheltered space running along the back of the left-hand side of the building. It even has its own entrance from the back of the gas station forecourt. Entering this way, there’s a row of four-person picnic-style tables against the left-hand wall. Opposite these is the cunningly-disguised door at the back of Flat Track, followed by another two of the tables, the first against the right-hand wall, while the second extends beyond the back of the building. Shade is provided by a series of large, yellow sheets strung between the walls, a similar system to the one at the front of Flat Track.

I visited twice, starting with a very busy Saturday morning, when I had my first speciality coffee in Austin. This was a cortado, made with the house blend, and served in a glass. A rich, complex, coffee with some long-lasting latte art, it was the perfect introduction of Austin’s speciality coffee scene. I returned after work on Monday evening to try a pour-over, sampling a Kenyan single-origin which had just come on that day. A lovely, rich coffee, with a dark, smoky (in a good way) aftertaste, it was just what I needed to wind down after work.

On my second visit, I bought a bag of the Rwandan Kanzu Washed (I really wanted the Kenyan that I’d had as my pour-over, but it wasn’t yet available in retail bags). I took this with me on my trip to New Orleans, where it ended up as a gift for the staff at Congregation Coffee Roasters.

If you want to see what Bex made of Flat Track, check out her Austin Speciality Coffee Guide (Flat Track is the fourth entry).