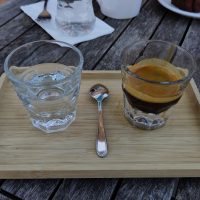 The Coffee Spot gets another year underway by returning to my mid-America road trip from October last year and the first stop on our return leg, Coffea Roasterie and Espresso Bar in Sioux Falls, South Dakota. Coffea has three locations, all in Sioux Falls, but this is the flagship, combining coffee shop and roastery in a lovey, multi-faceted space on the city’s west side. There are multiple choices on espresso, batch brew and pour-over, while if you’re hungry, there’s a selection of cakes and pastries, all baked in-house.

Sadly this was very much a flying visit since we had started late that day, had a long way to go and wanted to see the eponymous Sioux Falls (which are well worth the effort, and, if you have time for coffee, Coffea’s downtown espresso bar isn’t that far away). As a result, I wasn’t able to do a full write-up, lacking both the photographs and the extensive notes that I normally take, so instead you’ll have to make do with the year’s first Saturday Snapshot.

You can read more of my thoughts after the (very short) gallery. Note that the first photograph is from a Sprudge article on Coffea Roasterie.

Coffea Roasterie and Espresso Bar occupies a modern building on a small site it shares with a bank, mobile phone shop, restaurant and hotel. Even though we would subsequently pass close to Coffea’s downtown location when we visited the falls, we chose the West Side location largely for convenience. Just off I-29, our route through Sioux Falls on our drive south, it offered easy access and plentiful parking compared to downtown.

The roastery occupies the final part of the building, but is off-limits to the public, although you can look in through the windows to see the roaster in action. All of Coffea’s coffee is roasted here, which is predominantly single-origins from around the world, although Coffea also produces a seasonal holiday blend. Naturally, all the coffee is available to buy in retail bags.

Talking of which, when we were there, there were multiple options on espresso, with a single-origin on batch brew and a selection of single-origins on pour-over (using the Kalita Wave) or made using the cafetiere. I went for the Ethiopia Reko as an espresso, while Amanda had the Fosforico, a naturally-processed Brazilian, as a pour-over.

My espresso was lovely, a rich, smooth, well-balanced coffee, which is also how I’d describe Amanda’s pour-over, although she also got florals and tannins (for the record, we both really liked it). We also tried the cakes, opting for a Scotcheroo (which I’d describe as a chocolate-covered Rice Krispy cake), a slice of pumpkin bread and a French almond cake, all of which were delicious.

We enjoyed these sitting outside on the patio, which was surprisingly peaceful given the proximity of the freeway and the car park. Then it was time to go, although before we left, I dropped off a bag of the Brazilian espresso I’d picked up at Hardline Coffee in Sioux City on the way out, buying a bag of the Nelber Arevalo, a washed coffee from Peru, in return. This, in turn, ended up as a gift for the folks at Blueprint Coffee in St Louis two days later.

For more about Coffea Roasterie, check out this Sprudge Maps Spotlight feature.

2 thoughts on “Coffea Roasterie and Espresso Bar, West Side”