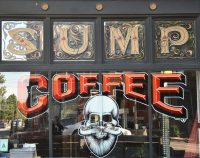 Continuing the return leg of my mid-America road trip from October last year brings us to Saint Louis, which marks the mid-point of the journey. We actually called in at Blueprint Coffee on the way back, but since I’ve already written about that, today’s the turn of Sump Coffee, where we stopped on the way out.  This is the original Sump Coffee, which also has a second location in Nashville. Occupying a beautiful old building on the corner of Winnebago Street and Jefferson Avenue, there’s a small outdoor terrace at the front, while inside Sump Coffee occupies three long, thin rooms, the last of which houses the 10 kg Diedrich roaster, which produces all the coffee, both for here and for Nashville.

Talking of which, you really are spoilt for choice when it comes to coffee. Like Sump’s Nashville location, there are three single-origins on espresso, with six more on pour-over, plus three cold brew options. Naturally, all the beans are for sale in retail bags, along with a selection of coffee-making equipment and merchandising. Meanwhile, if you don’t fancy coffee, there’s a selection of teas, while if you’re hungry, Sump has a range of cakes and pastries too.

Sump Coffee is south of the city centre in a quiet neighbourhood close to the Mississippi River. Standing on the corner of Jefferson Avenue, the long side of the narrow shop runs down Winnebago Street, where you’ll find plenty of on-street parking. Set well back from the street, there’s a small, enclosed terrace at the front, home to four round tables. It’s separated from the broad pavement by four tall fence panels, along with a row of planters. The streets, meanwhile, are lined with tall, mature trees, providing plenty of shade.

The door is on the corner, at 45° to both streets, with a large and beautifully-decorated window to the right, running the width of Sump. The beautiful, old, brick-built building is a complete contrast to the modern steel and glass home of Sump Coffee in Nashville: I struggle to recall two coffee shops that are more different to each other in look and feel.

You enter into a spacious main room at the front of Sump. The multi-part, curved counter runs down the right-hand wall, where you’ll also find the till. This is at the back, on a separate table which it shares with the retail selection. The seating, meanwhile, is fairly minimalist, with a narrow bar running down the exposed brick of the left-hand wall, while an irregularly-shaped six-person occupies the middle of the room.

A broad opening in the back wall leads to the second of three spaces. This provides more seating, with another (more regularly-shaped) six-person communal table in the middle, while there’s a three-person square table off to the right. Finally, on the left, by glass double-doors which act as both window and fire escape, there’s a tall, two-person cocktail table.

You’ll find the toilets back here on the right, while on the left, another opening leads to the roastery. This is off-limits to the public, but you can peer in and see, right at the back, beyond the packing area and the sacks of green beans, the 10 kg Diedrich roaster.

Sump only serves single-origin coffee with three choices on espresso, plus decaf, all the shots pulled on a  Sanremo Café Racer, the first of two that we saw on the trip (the second was at Hardline Coffee in Sioux City). However, just as we had been in Nashville, Amanda and I were drawn to the pour-overs, where there was a choice of six single-origins. Like Nashville, these were all made by the Poursteady automatic pour-over system using V60s.

We sat outside with Fergie (Amanda’s dog) but before we set off for Kansas City, I popped back inside to drop off a bag of the Kick the Can blend that I’d been given by the staff at Bellwood Coffee in Atlanta at the start of the trip. In return, I was gifted a bag of Sump’s Ethiopia Reko which itself ended up as a gift for Hardline Coffee at the end of our drive to South Dakota.